Most books about depression are, well, a bit depressing. Or they're written by people who can't help coming across as if they secretly think that being depressed makes them somehow extra-sensitive special people who, you know, just feel things more deeply than lesser, happier mortals, which always makes me uncharitably wonder if they've ever really been depressed at all. And I'm always amazed when people with depression seek out novels to read about the subject anyway. I suffer intermittently from depression, and I generally find it about as interesting as a puddle of vomit in the street.

Bearing all this in mind, then, Mr Chartwell is an truly impressive feat. Rebecca Hunt's novel is about Esther, a young widow who, in 1964, advertises reluctantly for a lodger. The only applicant is Black Pat, an enormous black talking dog. Put off by, well, by the fact that he's a giant talking dog, Esther is reluctant to let Black Pat stay. But once he's got a paw in the door, she finds it extremely difficult to get rid of him, and soon comes to realise that he may have been part of her life before. Winston Churchill, you may be aware, famously described his depression as 'the black dog' that hounded him (and indeed other members of his family) throughout his career. And it's no coincidence that just as Black Pat arrives to stay with Esther, Churchill, whose estate is a short drive away, is just about to announce his retirement. 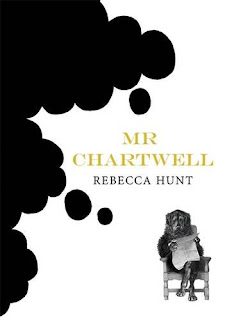 Mr Chartwell is a brilliant, absurdist, tragicomic exploration of living with depression. At times sinister, at times deeply sad and other times, full-on, laugh-out-loud funny, it's the only book I've ever read that even comes close to describe what it's like to be genuinely depressed, but never once descends into self-indulgence  or melodrama. Mr Chartwell is absolutely not one for the emo kids: it's not angsty, it's not full of despair, and although yes, it's deeply touching, it's not even really very emotional, as such. It's simply about the sometimes absurd condition - because it is absurd, in my experience - of living with a sly, persuasive, intrusive guest who makes everything you want to do infuriatingly difficult, but whom you don't quite have the strength to dismiss.

Comically creepy and hilariously disturbing in that peculiar manner of Edward Gorey's The Doubtful Guest, or a more mournful and less punchable Cat In The Hat, Mr Chartwell is an outstanding first novel. Esther is realistically imperfect and occasionally frustrating; her friends are sometimes infuriating but ultimately well-meaning; Churchill is an intriguing mix of vulnerable elderly man and stubborn British bulldog. Even Black Pat himself, who only really needs to exist to symbolise depression, is an intriguingly complex and frequently sympathetic character.

There's very little plot, but it doesn't need one: it's a compelling and, despite the subject matter, an ultimately heartwarming read. This is probably the only book about depression that I've ever felt remotely comfortable in reading, and, despite being about a giant talking dog, by far the most realistic description of the condition I've ever come across. All books about depression should be like this one.