If you are as grimly fascinated as I am by epidemics and other mysterious disease outbreaks, you may well have heard of Typhoid Mary. Typhoid Mary was Mary Mallon, an Irish immigrant living in New York at around the turn of the century, who became the first person ever to be identified as an asymptomatic carrier of typhoid, the often fatal fever which periodically broke out in the overcrowded, insanitary conditions of the city at the time. This in itself would be interesting enough, but what made Mary famous - or rather infamous - was that she repeatedly ignored warnings about her condition once released from quarantine and continued, under various false pretences, to undertake work as a cook, repeatedly infecting (and consequently killing) people who ate her food. 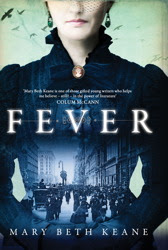 Fever is a fictionalised account of Mary Mallon's life, told largely from her point of view, although to a lesser extent, it is also the story of her infuriatingly feckless partner, Alfred. It's a fascinating tale and Mary Beth Keane builds a vivid picture of New York in the early 1900s, teeming with recent immigrants struggling to better themselves in desperate poverty, packed into tenement blocks, paying to sleep on cots in other people's kitchens, scrubbing clothes in Chinese laundries, selling cheap wooden toys from hired carts. This is a city in which horses that collapse on the job are left to rot in the street and boarding houses cram ten beds to a room and make their occupants share a single chamber pot. Yet at the same time, it's also a city in which a 14-year-old girl, as Mary is when she manages to survive the journey from County Tyrone to Ellis Island, can start her life all over again and make something of herself. Mary is an excellent cook, her skills sought after. It's Mary who supports Alfred, her partner, not the other way round; it's Mary who can save up enough of her wages to buy the very same hat her employer wears.

Mary herself is a complicated and - as you might expect - not always likeable character, and yet Mary Beth Keane has done an outstanding job in making her into someone with whom we can sympathise despite her often poor choices: Keane is extremely skilful when it comes to helping us understand Mary's decisions and rationale. The legality of her first enforced period in quarantine is dubious at best: separated from her partner and everything she knows, she is left with nothing to do to amuse herself, a strong and healthy woman surrounded by the dying and regularly subjected to humiliating tests and sampling while information is concealed from her and it's easy to see what a damaging effect this experience could be. Similarly, it becomes clear how and why cooking is so important to her, and why a life as a laundrywoman (the occupation chosen for her by the Department of Health when she is released) simply won't do: it's not just the poor wages and the exploitative hours, it's the lack of respect she commands, the lack of an opportunity to show that she's good at something, to create something to be proud of. Mary is intelligent, perceptive and tough, and she is probably not entirely wrong in her belief that 'They blamed her because she was opinionated, and Irish, and unmarried, and didn't bow to them.'

I did at times find it hard to reconcile Mary's intelligence and determination with her relationship with Alfred, with whom, on and off, she lives. Like Mary, Alfred makes repeatedly poor choices, but unlike Mary, his choices are impulsive and ill-considered; also unlike Mary, he lacks determination and pragmatism and has a serious drink problem. I found it hard to understand what Mary saw in Alfred and why she continued to love him - but perhaps we all know someone who seems inexplicably tied to a partner who seems depressingly unsuitable for them.

If you already know, as I did, what happened to the real Mary Mallon, the plot of Fever contains few surprises, and in fact, even if you don't, it's pretty straightforward stuff with a rather episodic structure and nothing unexpected. But this is a novel full of atmosphere and crammed with arresting little details about a stage in New York's history that seems strangely out of control - a 'best of times, worst of times' sort of period, full of the excitement of an up-and-coming melting pot of city in which great things are happening, yet at the same time, strangely out of control. Skyscrapers are being built and scientific advances are being made in epidemiology and healthcare, yet at the same time, families are dying in appalling slum housing and working in dangerous sweatshops: among the smart, orderly new architecture of the growing city and its officious bureaucracy, there is a swarming, chaotic poverty for which the spread of a deadly disease becomes an apt metaphor.
Email Post
Labels: 1900s book book review disease epidemics historical fiction mary mallon new york review typhoid typhoid mary