What I read on my holidays 3: The Neighbors by Ania Ahlborn 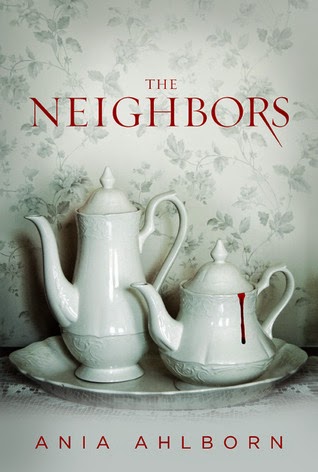 The blurb for The Neighbors describes it as "an insidiously entertaining tale of psychological suspense and mounting terror by the boldest new master of the form, at the intersection of Basic Instinct and Blue Velvet". It's the story of Andrew Morrison, who leaves home after a row with his alcoholic mother, moves into a rundown property with a deeply unpleasant housemate, and finds himself fascinated by Red and Harlow Ward, the strangely glamorous couple next door who seem keen to take him under their wing. To me, this all sounds quite promising.

Unfortunately, The Neighbors simply fails to deliver on pretty much every level.

First of all, Andrew - who is also irritatingly referred to as Drew and Andy throughout, despite the narrative being from a third person omniscient point of view - has little in the way of either depth or backbone. His departure from his mother's home is not especially convincing, and nor is his response to the strange reaction he gets from his new housemate Mickey (sometimes called Mick, which irked me as much as the Andrew/Drew/Andy business) when he arrives after agreeing to move in. He's perturbed by Mickey's incredible rudeness upon his arrival, but fails to confront him about it or even question it, despite Mickey being a old childhood friend. Moreover, his obsession with the Wards simply doesn't seem credible. Admittedly, Andrew might be looking for a mother figure or a family unit, given his background, but I still fail to see why he'd a) develop an erotic fixation with an obviously mad middle-aged woman solely because she's well-groomed and makes him some cookies or b) believe for one moment that a suburban couple could possibly need to pay him to work full-time simply on some low-skilled maintenance jobs around the house. Why does this not make him in any way suspicious?

Similarly, while we're constantly reminded that Harlow Ward is an attractive woman, there is no real explanation for her apparent magnetism or her ability to manipulate her husband into turning a blind eye to her blatant violent lunacy. It's simply not plausible in any way. I kept suspecting that there might be some sort of supernatural element to it, as this seemed the only possible explanation, but no, it's nowhere near as interesting as that.

Red Ward is largely devoid of character, as is Mickey. Harlow herself is essentially just a dangerous nutjob, and while some cursory effort is made to explain her psychological issues, it's a pretty poor one that's also tastelessly dismissive of the type of experience she's been through. And there is little suspense, either, simply because everything is so obvious and happens with such unlikely speed. There are no real surprises, and no attempt to build any kind of atmosphere.

Finally, the quality of the writing overall seems low to me. It's all telling and no showing, with clunky exposition and asides on the characters and their behaviour that take the place of character development through action and dialogue. Harlow Ward, supposedly the all-important, all-powerful lynch-pin of the novel, is reminiscent "of that Mad Men show - her hair, her clothes; they were profoundly retro". Is that kind of lazy catch-all, shorthand description really the best the author can do?

I honestly hate writing bad reviews, and I can usually find plenty to enjoy even in a book that didn't really work for me. Unfortunately, not this time.