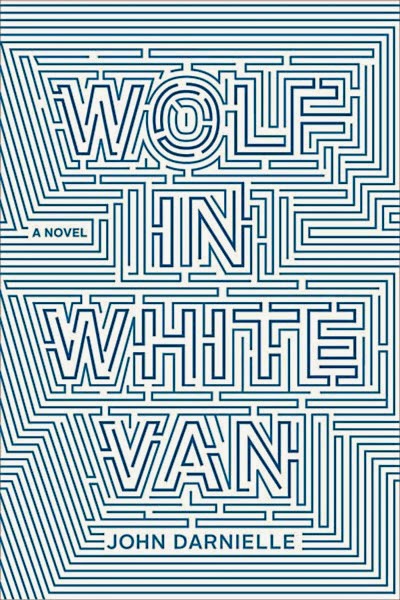 If you know me beyond this blog you may be aware - by which I mean, you may have got bored with me banging on about it - that I am a huge fan of The Mountain Goats, led by (and often consisting solely of) singer-songwriter John Darnielle.

Wolf In White Van is Darnielle's first novel, and those who know his music will certainly notice recurring themes and motifs in the book that crop up repeatedly in his lyrics. Misunderstood teenagers drifting through comic shops and amusement arcades in soulless, rundown American towns, depression, awkward family relationships and a tendency to retreat into a world of fantasy are all elements of Wolf In White Van that Mountain Goats fans will recognise, and as usual, Darnielle writes about them with remarkable poignancy and clarity.

Don't, however, imagine that you need to know Darnielle's music to enjoy this book. It's an exceptional piece of work by any standards. I would be reviewing this in exactly the same way had I never heard of the author's previous work.

Wolf In White Van is an introspective, reflective novel narrated by Sean, a young man whose face has been partially destroyed by an 'accident' at the age of 17. Sean makes his living through what is essentially a role-playing game by correspondence that he devised during his recovery. Called Trace Italian and set in a post-apocalyptic America, it's played by the readers of comic books and science-fiction magazines who pay a subscription fee and receive each step in the game by post, mailing their choices for the next move back to Sean in attempt to reach the game's ultimate goal, a secretly-located safe haven for survivors.

As the story gradually unfolds, we learn not only of an alienated teenage couple whose intense obsession with Trace Italian (and with each other) has resulted in tragedy, but also of the days leading up to the horrific event that left Sean disabled and severely disfigured.

There is a great deal of beauty in Wolf In White Van. Darnielle's prose is outstanding, and there are whole passages that read to me like an extended prose-poem. His ability to pick out mundane details and turn them into something of an incredibly evocative, sometimes tragic significance is nothing short of remarkable. There is also such a desperate, vividly-realised sadness to parts this book that at times I found it almost painful to read (and rightly so - this is no criticism on my part).

A short but digressive novel, Wolf In White Van doesn't really leave its protagonist in any different state, mentally or physically, than the one in which he starts his story, and at the end, I was left wanting something more afterwards to bring the story to a neater finish. However, this by no means a plot-driven novel and it can't be denied that the ending is a powerful one, however uncomfortable it was for me to read: I can admire Darnielle's decision to leave the story there rather than pandering to any desire for a more reassuring conclusion.