As I've mentioned before, I have a Kindle (although I now have a different model to the one I reviewed in that post). However, I do still buy physical books. If I want a book that's a really lovely edition or has a lot of illustrations or photographs I buy them new, and I often look in second-hand shops for paperback novels.

It was my birthday last week so I had the week off work and we did quite a bit of travelling around. My boyfriend's hobby took us to York and Newcastle and an incredibly cheap TravelZoo hotel deal meant we could just about afford a trip to Wales towards the end of the week. I did a bit of shopping for books in charity shops and independent second-hand bookshops, and I also got given some nice books for my birthday and spent some of the money I was given on books in Waterstones.

My Waterstones purchases were A Natural History of Ghosts by Roger Clarke and The Fabled Coast by Sophia Kingshill and Jennifer Westwood. 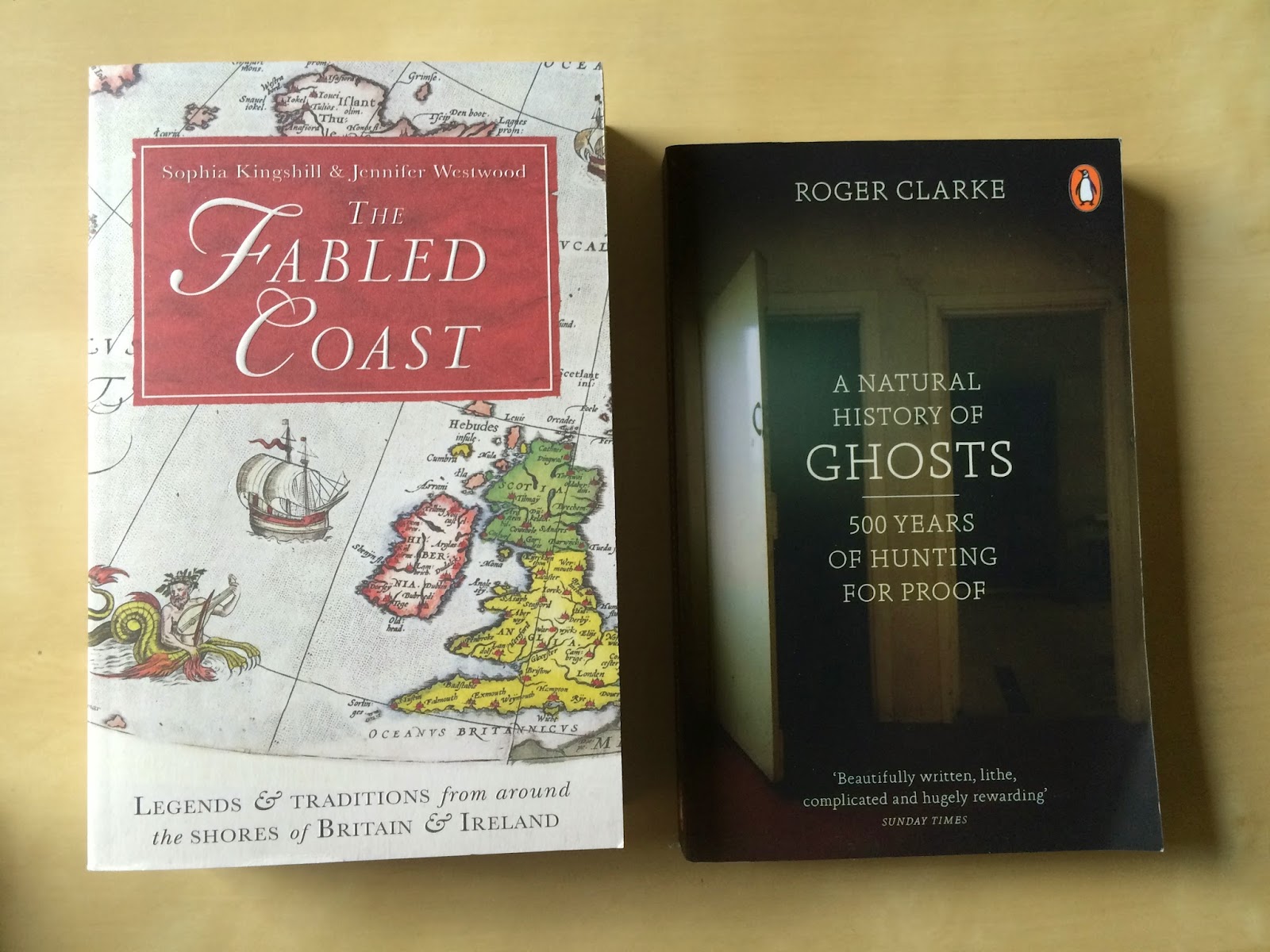 I've been wanting to read A Natural History of Ghosts for ages. Roger Clarke has been fascinated by ghosts for most of his life, although is quite open about the fact that he's never seen one (and I would probably be less keen to read his book if he claimed he had). I don't believe in ghosts but I love ghost stories and I do think it's very interesting that so many people are truly convinced that they have had ghostly experiences. This book is about different types of ghosts people believe in and also looks at the science, psychology and cultural history of ghosts and ghost stories. It's been very favourably reviewed and I'm looking forward to reading it.


The Fabled Coast is a very comprehensive encyclopaedia of folklore, myths, local legends and fairy tales from all over the UK. You can either just dip into it at will or you can look up specific places that you're visiting and get a little insight into the area's local mythology. It would also be a great book for writers; a lot of the stories would make good prompts for fiction.

Two of the books I got for my birthday were Soviet Space Dogs and Horror Stories: Classic Tales from Hoffman to Hodgson, both of which my boyfriend bought for me. They're both lovely hardback editions and Soviet Space Dogs is beautifully illustrated with photographs, propaganda and images of souvenirs of the many dogs who were part of the Soviet space programme. 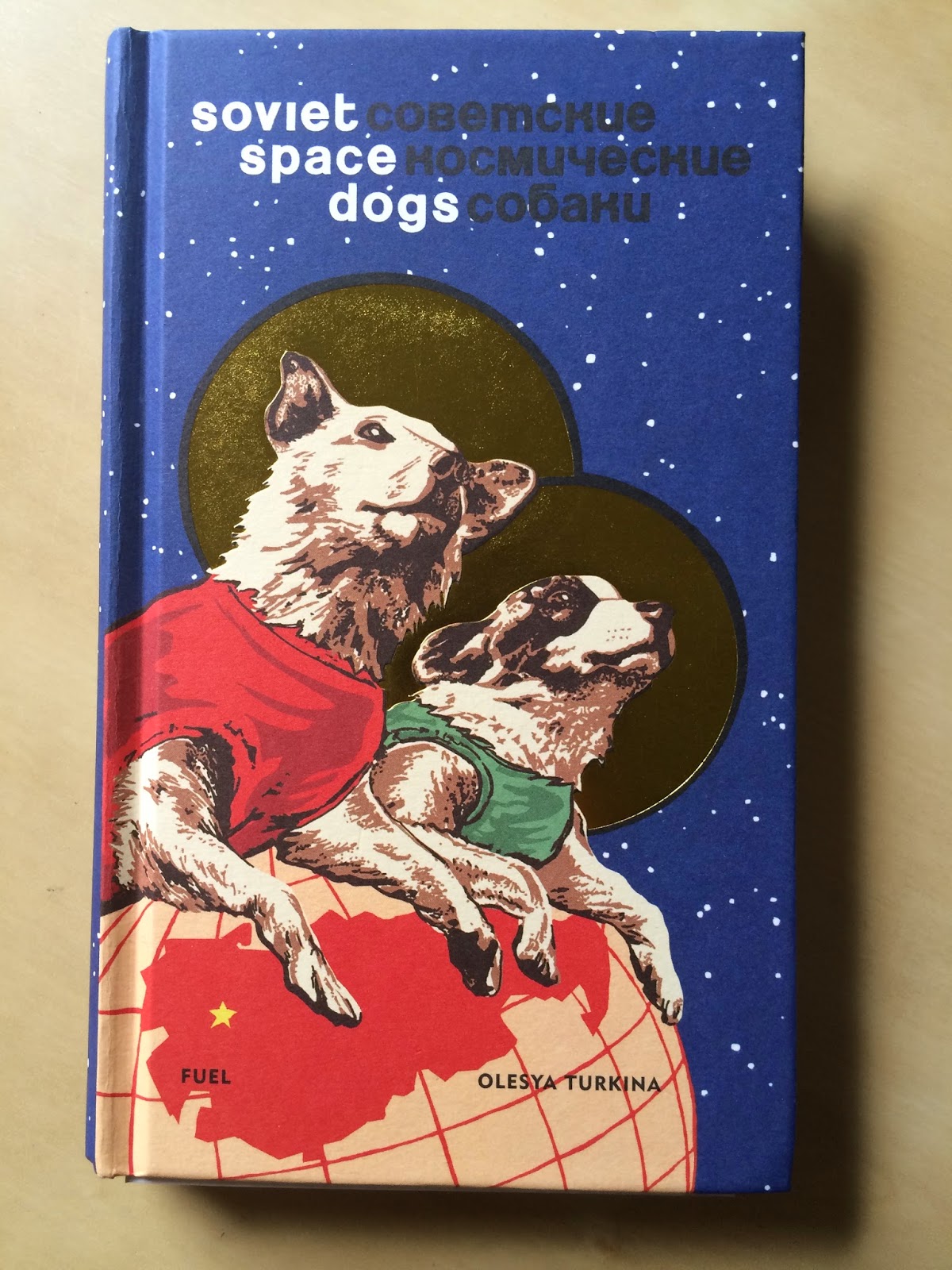 It is sad in parts - some of the dogs lost their lives - but also extremely interesting and many of the dogs were looked after as mascots by office and laboratory staff after their role in the space race was complete. What is really fascinating is the cultural significance that the dogs played in the Eastern Bloc - they were the subject of films, toys, children's picture books, stamps and all sorts of odd merchandise in their day. I love dogs and am fascinated by the art and popular culture of the Soviet Union during the Cold War years, so this was a great choice for me. My boyfriend bought it from Magma on Oldham Street, Manchester, which sells lovely, unusual books that are either about design or are just beautifully designed in their own right, as well as all sorts of other unusual things. If you're passing I recommend you go in and have a browse. There are two branches in London as well, I believe. 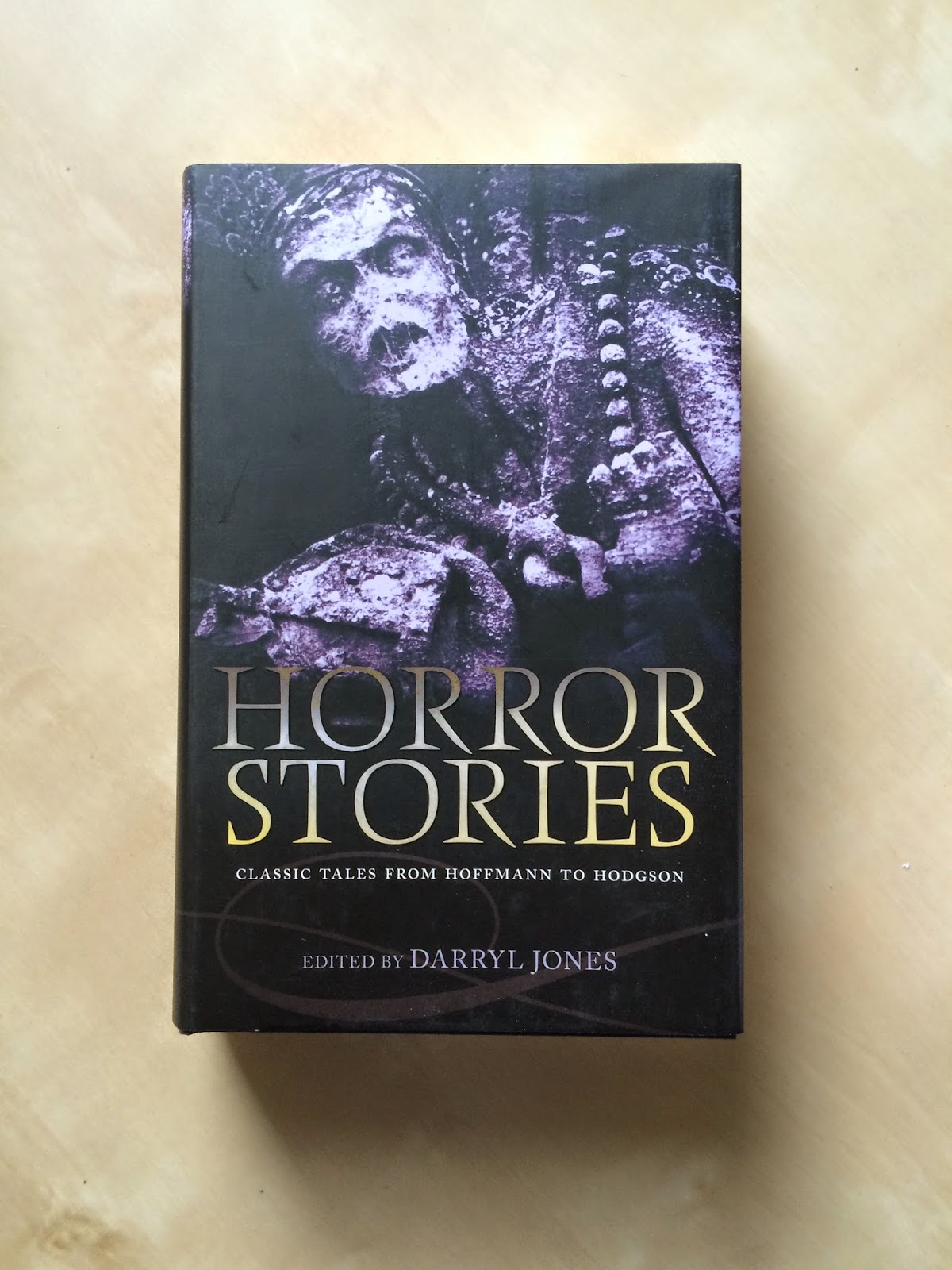 The Horror Stories book is an anthology of classic supernatural fiction from the 19th and early 20th century, a very influential period for horror fiction. It's edited by Darryl Jones and has some of my favourite stories in it as well as some I haven't read yet, and it's another well-chosen gift for me. 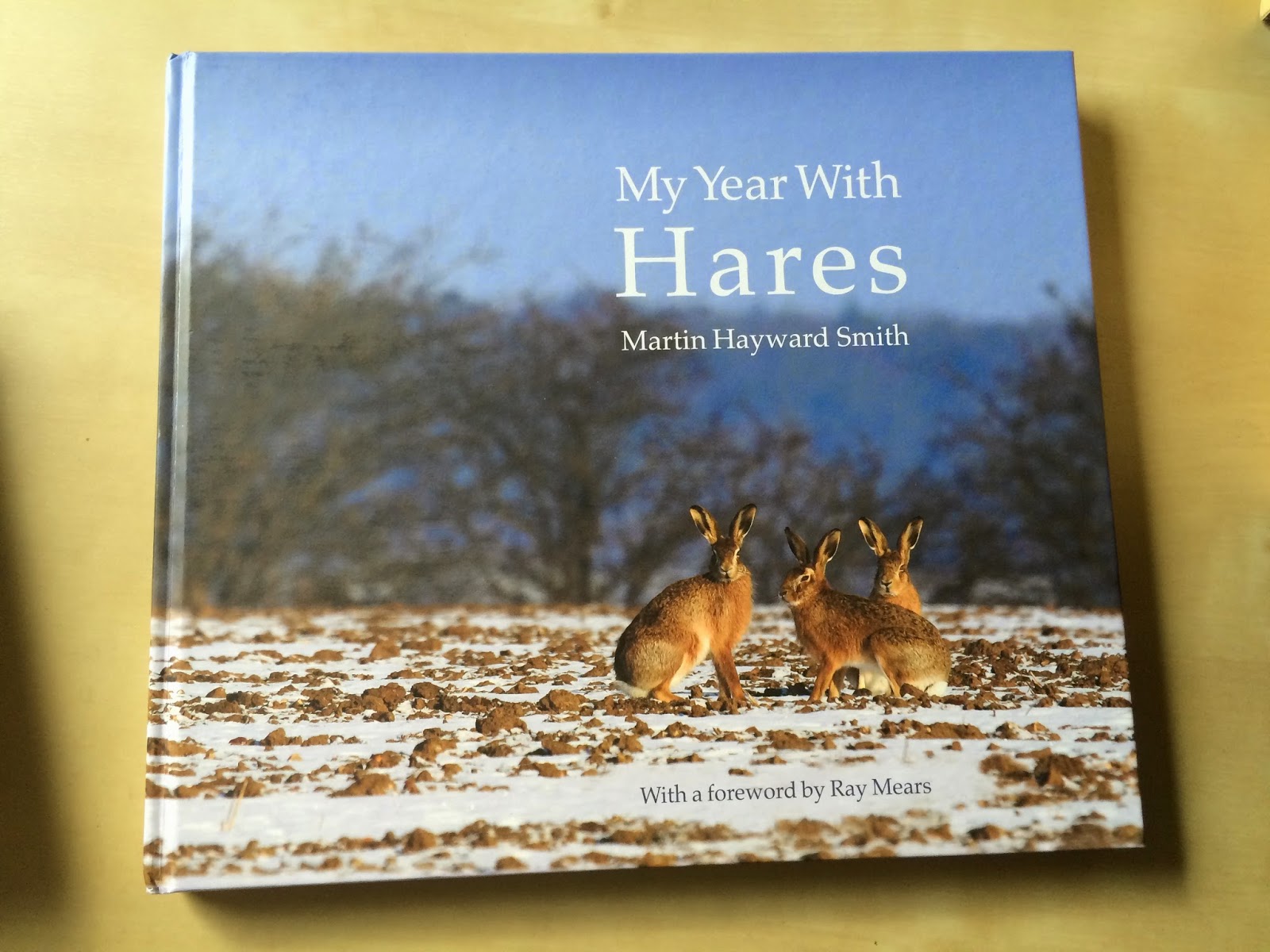 I also got a  beautiful book from my parents: My Year With Hares by Martin Hayward Smith. I love hares so much that I have a tattoo of two hares on my back.

This book is a photographic diary of a year spent observing and photographing hares in the Norfolk countryside, and the author even raised an orphaned leveret for a few months in his own home before releasing her into the wild. The photographs are stunning and give you a really strong sense of the passing of the English seasons and the year turning full circle, as well as capturing the combination of strength and fragility that makes hares so special.

The Quarry by Iain Banks - I find Iain Banks' work quite variable in quality if I'm honest, but this was his last novel and was apparently written while he was dying. The story also deals with the last days of a dying man, but Banks is usually far from sentimental so I'd like to see what this much-missed novelist did with the novel and the character. Although I bought it second-hand the copy I got seems brand new, so a bargain at £2.50. 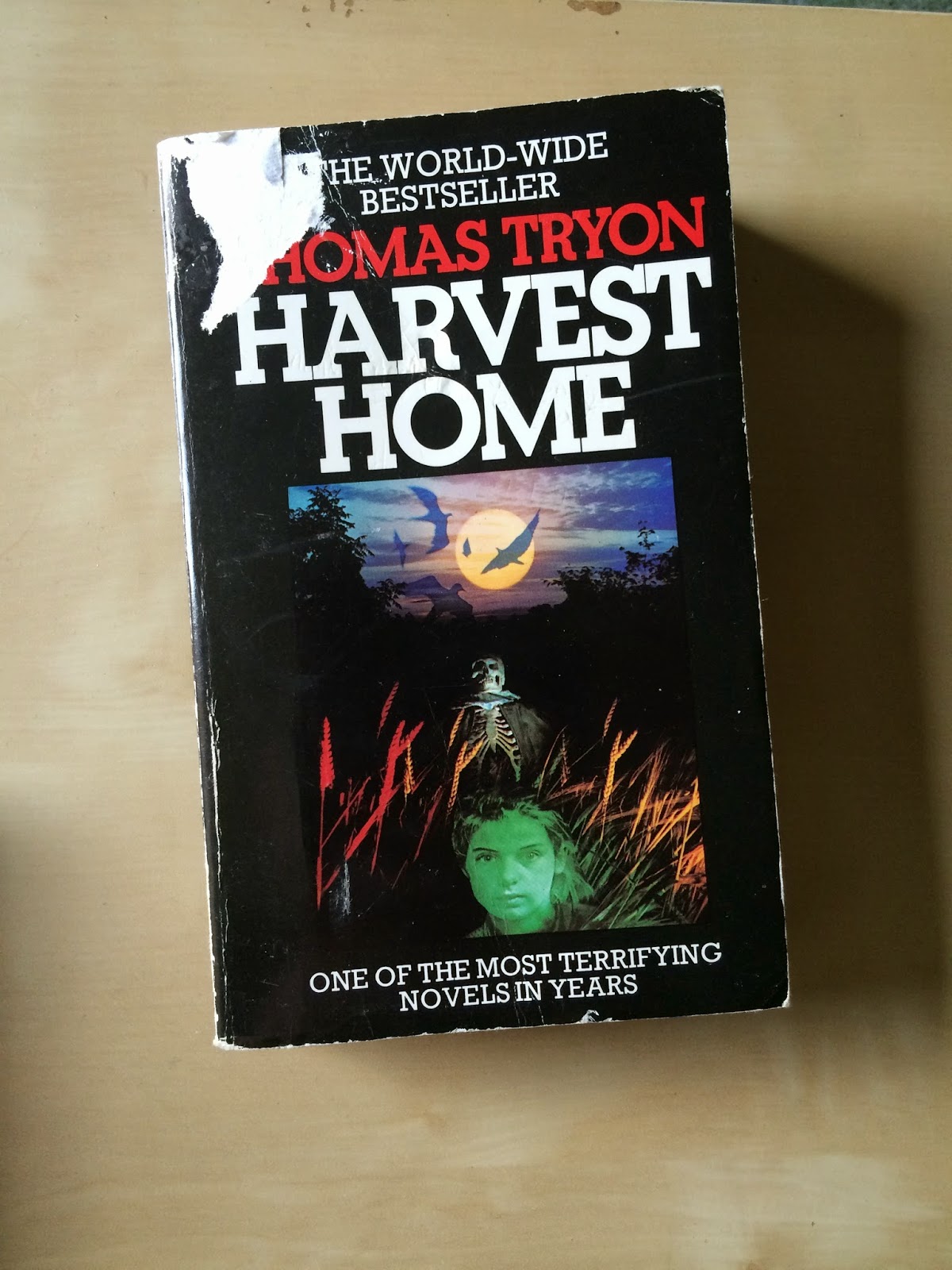 Harvest Home by Thomas Tyron - my sister asked me recently if I'd seen the old mini-series adaptation of this. I haven't seen it yet, but her recommendation meant that this copy of the novel caught my eye. It's quite obscure so it was quite a coincidence that I discovered a copy so soon after she mentioned it. It's a folk horror story set in America. It was only 75p as it's very tatty. It has also has a hilariously naff cover, as you can see from the picture.

Astonishing Splashes of Colour by Claire Morrall - I'd never heard of this, although it was shortlisted for the Booker Prize a few years ago. I got this in Oxfam Books where they had cleverly wrapped a few books in plain brown paper and were selling them at extra-cheap prices in a sort of lucky dip with just a few hints written on the wrapping to tell you roughly what kind of book to expect. What a great idea! I'm really glad I took the chance as I probably wouldn't have picked it up otherwise and it sounds very good.

Deliver Us From Evil by Tom Holland - as soon as I saw this book I remembered that I bought a copy in around 1998, and that before I'd even had a chance to read it, my ex-boyfriend read it himself and then lent it to someone else without asking me. Anyway, I never got it back so I thought I'd have a second attempt at reading it 17 years later. It's a sort of gothic revenge tragedy set in the Restoration, apparently. 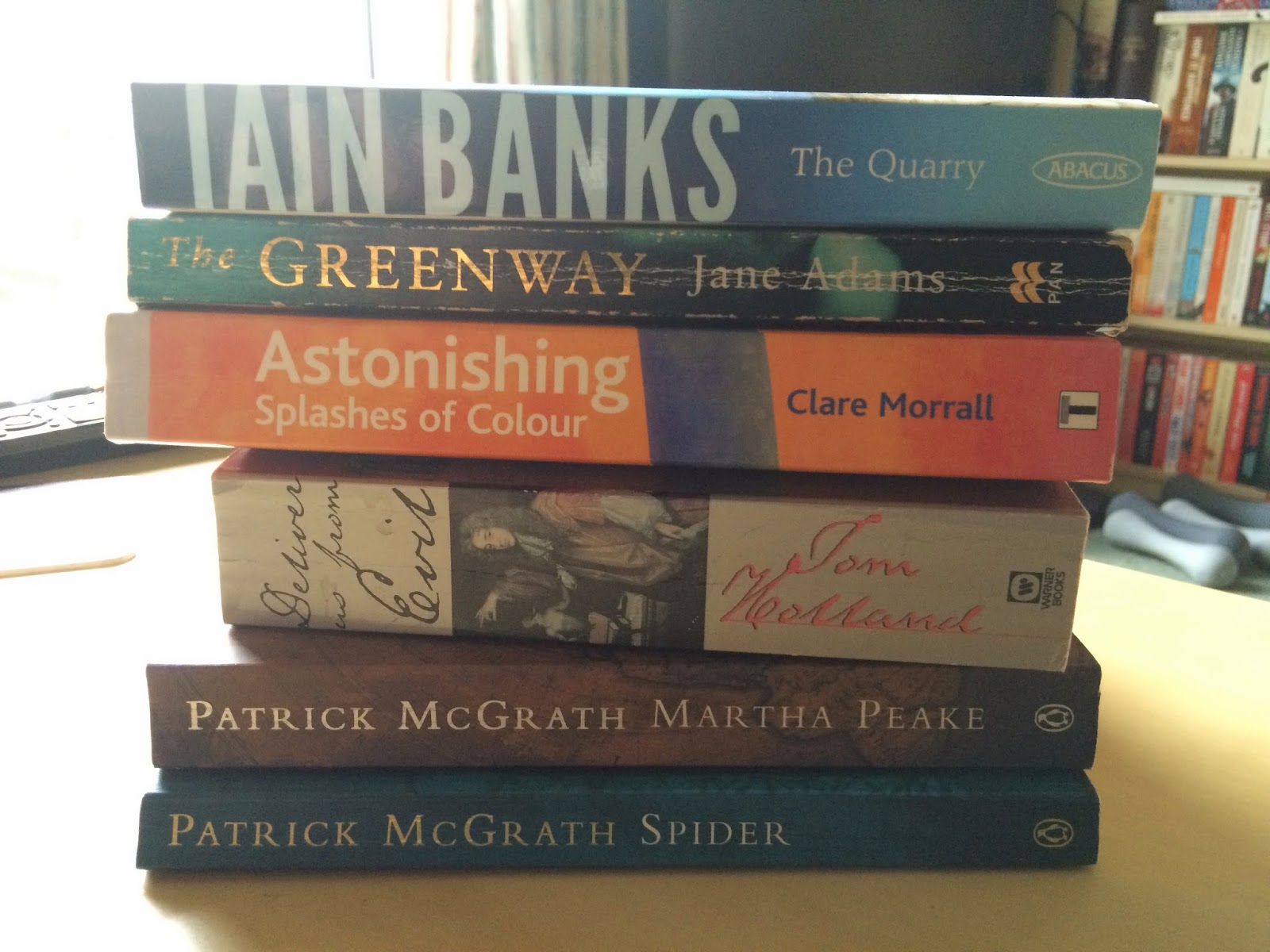 The Greenway by Jane Adams - I've never heard of the book (published in 1995) or the author before, but it's a psychological thriller that looks up my street.

Spider and Martha Peake by Patrick McGrath - I read McGrath's Asylum a couple of years ago and enjoyed it. I couldn't decide which of these two to get and as they were only £1.50 each I got both. You can never have too many books.