I bought this book because I wanted something light, easy and funny to read when my concentration was completely destroyed by a two-week bout of illness. It’s not a genre I often read, but I quite like John O’Farrell, Nick Hornby and Helen Fielding, who are good at writing warm but gently satirical domestic comedies, and that was the kind of thing I was looking for. Plus, Fat Chance is about a couple who enter a ‘Biggest Loser’ style weight loss competition, and trust me, I know all about gaining and losing large amounts of weight.
Unfortunately, this book fails for me on just about every level. For a start, the couple at its heart, Zoe 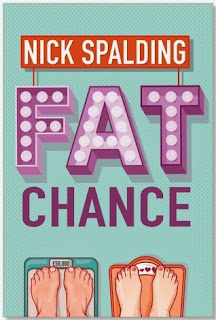 and Greg, do nothing at all to make me give a toss about them. All you really need to know about their relationship is that Zoe makes Greg take part in the competition by telling him he’ll never get another blow-job from her if he doesn’t; their marriage really is that much of a cliché. Zoe is the sort of woman who forms friendships over skinny lattes with women she appears to actively dislike and is rude to sales assistants. Greg is a childish buffoon whose biggest fear in life, constantly articulated in his weight loss diary, is appearing ‘effeminate’ or ‘looking like a poof’ in front of his awful rugby club friends – one of which, by the way, is a flash cockney Asian man called Ali who naturally only drinks Tiger beer because haha, Indian people, eh?

Other stereotypes include fellow Fat Chance competitors Lea and Pete, who are working class, and therefore in the world of this book are automatically thick and foul-mouthed, referred to constantly as ‘the chavs’ and have their potential criminality alluded to every time they appear. Zoe’s mother has OCD; naturally this is the subject of much hilarity even though it appears not to manifest itself in any actual symptoms at all. Shop assistants are stupid and sullen. Women who are into fitness are either scrawny, flat-chested and pop-eyed, or hot pneumatic blondes. These stereotypes are predictable and lazy - and most importantly, not funny.
Moreover, so much of this book is just so wildly unrealistic that it fails completely as observational humour. Of course I’m not expecting gritty realism from a comedy, but there does need to be a grain of truth at the heart of comedy that we can recognise if we're to find it funny. But there are endless ludicrous moments that are simply not recognisable as life as we know it. The Fat Chance competition is run by the radio station that Zoe works for, and the presenter is her best friend – yet she is still allowed to enter. There is an entire chapter when Greg becomes properly, full-on stoned by taking an extra dose of ibuprofen. Later, he takes to drinking more coffee than usual, which has such ridiculous, impossible and utterly unrecognisable effects on him (detailed over and over again in a chapter that seems interminably laboured and repetitive) that I was genuinely expecting there to be a punchline in which he’d somehow been eating food laced with speed.  Despite half the contestants regularly swearing or saying inappropriate things on live radio every time they attend their weigh-in, they are invited back time and time again. And we’re also expected to believe that taking part in a competition on local radio has people clamouring for your autograph.
Zoe and Greg, while clearly overweight, are not, frankly, anywhere near overweight enough for the endless fat-related humiliations they suffer to be particularly plausible. The book opens with size 18 Zoe getting stuck in a dress at M&S. I’ve been a size 18, and yes, certainly for a woman my height, that’s pretty overweight. But it’s not a size at which you can’t shop on the High Street or maintain a reasonable level of fitness. There are size 18 women who happily run marathons and swim 50 lengths. They don’t get stuck in clothes at M&S because a size 18 isn't even the biggest size that M&S stocks.
The overall message of the book is basically ‘being fit and slim is nice and you can fit into more clothes and not break garden chairs and be laughed at by your friends, for whom you weirdly seem to have zero affection anyway. But remember, everyone! Crash diets are bad for you and you just need to eat less and move more.’ This is fair enough, but hardly groundbreaking stuff, and in the later chapters of the book it’s hammered home in a clunky and patronising way. Moreover, despite the message, losing weight on appalling starvation diets does solve all Greg and Zoe’s problems – Greg gets picked for the first team at his rugby club, Zoe’s fertility problems melt away and her friendship with DJ Elise inexplicably survives despite the fact that Elise is clearly a spiteful cow and she and Zoe have devoted months of their lives to humiliating one another. There’s no real plot here. A couple want to lose weight. They do. Suddenly everything's fine. The end.
I honestly have no idea why I finished this book, as I'd generally give up on a book I hated this much before the end; that's why I give so few entirely negative reviews. I notice that it has a vast number of four and five star ratings on Amazon, too, so clearly Nick Spalding's work is appealing to thousands of people; who am I to say they're wrong? All I can say is that for me, personally, there was no enjoyment to be had from Fat Chance, and I slightly regret the time I spent finishing it.
Email Post
Labels: book comedy diet fat fat chance humour negative nick spalding obesity review weight weight loss