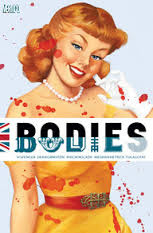 Right, first of all, I don't recall ever having read a graphic novel before and know almost nothing about the form, so forgive me if I review Si Spencer's Bodies (originally released in eight episodes but now brought together in a single volume) in completely the wrong way: the last book I read that had speech bubbles was probably a Monster Fun annual so essentially I have no other graphic novels as a reference point.

Anyway. The initial set-up of Bodies is an absolute belter: there are four detectives, operating in four different time periods ... investigating what appears to be exactly the same murder. Same corpse, same position, same location and the same elements of what appears to be a ritualistic killing.  The only thing that seems to connect the detectives is that they are all to some degree outsiders. Shahara Hasan is a hijab-wearing Muslim police officer in the present day. In Victorian London, Inspector Hillinghead is trying to conceal his homosexuality from his colleagues. In the Blitz-ravaged East End of 1940, Karl Weissman - or Charles Whiteman, as he prefers to be known - has escaped the Warsaw ghetto only to become a corrupt copper. Finally, far in the future, a young woman whose name may or may not be Maplewood has a brain so addled that she's barely aware what a corpse is at all. Throw in the cult of Mithras, apocalyptic pulse waves, neo-fascist terrorist groups, Jack The Ripper, psychogeography, potential shamanism and cryptically repeated instructions to 'know you are loved', and you have a dizzying, high-concept mystery with immense scope and ambition.

Unlike a lot of high-concept fiction, however, Bodies doesn't skimp on character: each detective has a strong individuality that comes through in the dialogue as well as their actions, and there isn't a stereotype in sight (this, in itself, is significant to the story). Neither does its undeniable cleverness come at the expense of a heart: there's plenty of humour, and also some genuinely affecting moments, not least in the final pages. If you don't feel find yourself a little misty-eyed at the ending, you may well have something wrong with you - especially if you happen to be English.

England and Englishness are central to Bodies - it's essentially a story of identity and culture. I don't think I'm giving too much away when I say that this not really a murder mystery at all, and the corpse, reappearing in the same location to different people at different times - people whose speech and thoughts carry occasional echoes of one another - has a symbolic significance to England.

And yet, as is clearly evident by the diversity of the characters and their circumstances, English identity can mean a million and one things to any and all of us, and is inextricably entangled in our endlessly complicated history and melting pot of cultures and influences, in our finest moments and our most shameful. This is reflected in Bodies not just in character but also in language and setting.

Throughout the book you'll find countless hints, clues, references and allusions, not just in the dialogue but in the names of people, places and things - and indeed within the artwork. In fact, by the time we reach Maplewood in 2050, her consciousness seems to consist of almost nothing else as she struggles to piece together snippets of memory and language into anything of which she can make some sort of sense. And is the murdered man re-appearing over and over again, like a reverberating echo through time? Or does he appear once, but in simultaneous time periods? Most importantly, are you confused yet? If not, you probably should be, because if you finish Bodies without wanting to go straight back and look for more things to try to understand, you've seriously missed out on the fun.

I've now realised that I've got through this whole review without mentioning the artwork, which is clearly incredibly important to the book. Each of the four detectives' stories has its own artist and its own colour palettes, which gives each time period a distinctive atmosphere. There's a smoky, noirish feel to the 1940s sections, which are visually my personal favourites - you can almost hear the eerie wail of distant air-raid sirens, and every frame is rendered with incredible detail. The Victorian storyline has hints of Hammer and steampunk, with a fantastic dark colour scheme with splashes of Ripper red. In 2050, Maplewood wanders through a disorientating, far more stylised world filtered through unnatural, suitably sickly neons, as befits her confused mental state. Shahara's investigation takes place in a gritty-looking environment of concrete blues and greys, as if we're looking at news footage or even CCTV. Despite the clear visual differences between each section, the different colour palettes used for each (the work of colourist Lee Loughridge) are carefully chosen to give the whole thing a sense of continuity and cohesion that isn't just visually pleasing but is also symbolically significant.

If you want a clear and straightforward mystery with all the loose ends tied up, you won't find that here: this book is strange, ambiguous, complicated and open to interpretation, like a jigsaw puzzle that constantly shifts and expands as you try to complete it, and occasionally turns into a crossword puzzle or a treasure hunt just for larks. However, I personally found it no less satisfying for that, and this is a book that I'll re-read over and over again.