Abigale Hall by Lauren A Forry

Every now and again I come to the end of a book and realise that I'm not really sure whether I liked it or not. Abigale Hall by Lauren A Forry is one of those books, so bear with me if my review seems contradictory. 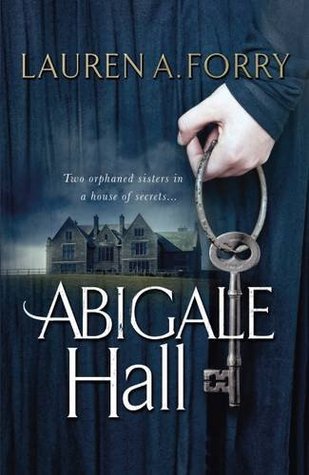 The story is set in the late 1940s. Teenagers Eliza and Rebecca live in London with their hard-as-nails Aunt Bess after losing both their parents in the Second World War. Although she isn't explicitly described as such in the book, it's obvious that Rebecca has learning disabilities and mental health problems. She's breezily articulate but struggles to control her temper and appears to lack empathy and social skills; it's also hinted that she has spent time in some form of institution. Seventeen-year-old Eliza, who works as a theatre usher and has a boyfriend, Peter, is more or less entirely responsible for Rebecca's care and clearly feels a heavy burden of responsibility. One day Aunt Bess sends both girls to rural Wales, having found Eliza a position as a general purpose maid at Thornycroft, a dark and rambling manor house owned by an elderly, disabled recluse (the 'Abigale Hall' of the title is not the manor house, but only a particular part of it) and run by a cruel, cold housekeeper, Mrs Pollard. From the moment the girls arrive, something seems to be terribly wrong at Thornycroft, but Eliza has a vivid imagination and is badly affected with what seem to be post-traumatic symptoms after her father's death. Is Thornycroft really as full of dark secrets as Eliza suspects?

The book's post-war setting is nicely evoked, and makes a pleasing change from Victorian gothic while managing to be every bit as dark and shadowy. It feels stylised rather than entirely realistic (I don't think the author is British, and that does show at times) but that works well in the context of the story. However, I found this book rather slow-going at times, and the endless creepy goings-on and appalling wrongs done to Eliza by Mrs Pollard soon started to feel repetitive. There are only so many times I could read about Eliza eating or smelling terrible food that makes her feel sick, and only so many times Mrs Pollard could berate Eliza for some trivial misdemeanour, before I began to tire of it. Mrs Pollard herself was also too much of a stretch for me to believe in, a sort of cross between Mrs Danvers and the Wicked Witch of the West.

There is also a subplot involving Peter, Eliza's boyfriend, who is trying to find out what has happened to her, and how. I found I couldn't really engage much with this part of the storyline, which strays into the seedy post-war London underworld, and for me it just seemed to jar with the rest of the story - it's much grittier and more realistic than Eliza's storyline. If Abigale Hall were a film, it would feel as if Brighton Rock had been cut with Crimson Peak.

On the plus side, the descriptions of the sensations and smells of London and Thornycroft are almost viscerally vivid at times - Eliza seems to be hypersensitive to both in a way that borders on obsessive-compulsive. Eliza and Rebecca are also fascinating characters, and the relationship between them is complex. Eliza is not an entirely reliable narrator, and at times seems to be hiding as much from the reader as Thornycroft itself.

Overall, while there was a lot that I enjoyed about Abigale Hall, and the book is cleverly plotted with an interesting protagonist and setting, I felt it was somehow less than the sum of its parts. I certainly didn't feel as if I'd wasted my time reading it and the gothic craziness of it all is fun, but for me the different elements of the book didn't really hang together as a whole and something was lacking.