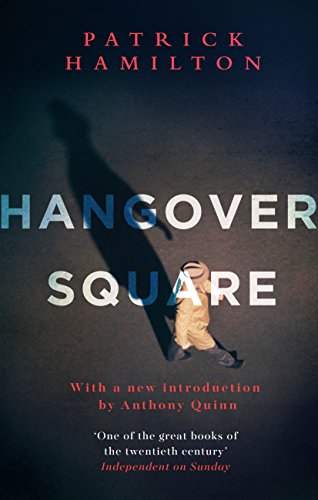 It seems incredible that I'd never read anything by Patrick Hamilton before, as I love books set in London in the early 20th century. Hamilton wrote primarily about London in the 1930s and his work is widely praised for being beautifully evocative of his time and location. While I was aware of his work as a novelist and a playwright (his plays included the brilliantly sinister Rope and Gaslight) I hadn't, for some reason, got around to reading his books. What finally prompted me to do so was Kathy Burke's enthusiastic review of Hangover Square on BBC Radio 4's A Good Read, which reminded me that there was a Hamilton-shaped gap on my bookshelf.

Hangover Square's protagonist is George Harvey Bone, a shambling, awkward, gentle giant of a man living in shabby Earl's Court on a small private income. Bone spends his days drifting from pub to pub with a group of drinkers that revolves around sometime actress Netta Longdon, with whom he is desperately and hopelessly in love. Fully aware of this, Netta is relentlessly cruel to George, openly taking every advantage of his placid nature and his generosity with his moderate funds while treating him without civility, let alone kindness. He is, to Netta and her bullying associates, 'the dumb butt of their unfriendly wit'. What Netta doesn't know, however, is that George suffers from some sort of schizoaffective disorder and experiences 'dead moods', strange periods of confusion during which his only clear thought and purpose is killing her.

If you think this sounds bleak, you'd be right - it absolutely is. Set in 1939 with war on the horizon, Hangover Square is a dark, bitter and deeply sad book, but it's also a brilliantly written and atmospheric one which I immediately loved. The characters drift through a grey, smoke-fogged world of Earl's Court pubs, boarding houses and bedsits that perfectly evoke pre-war London. George Harvey Bone himself is vividly memorable, frustratingly weak and self-destructive in his descent into alcoholism and slavish devotion to Netta, sinister during his dissociative episodes and yet somehow, I found myself rooting for him throughout. His delight when he reconnects with Johnnie, an affable, well-adjusted former friend from George's pre-Earl's Court days, is incredibly endearing. Whenever George briefly rediscovers a simple pleasure he used to enjoy, such as playing a round of golf or reading a novel, we catch a glimpse of a George pre-Earl's Court, a George pre-alcohol, a George pre-Netta, we realise what he could be if he could only find the strength to escape. Indeed, most people who meet lumbering, shy George away from Earl's Court do seem to like him - far more, in fact, than they like beautiful, confident Netta, of whom Johnnie gets the measure within moments.

Netta herself is an equally fascinating character, albeit one with few redeeming features: it's clear that she is an alcoholic, and I was able to feel some sadness for her in that respect, but she is also in every way the very antithesis of all things kind, fair and decent. In learning the novel's basic premise you could be forgiven for thinking that George is simply a bitter occupant of the 'friend zone', expecting a romantic relationship as a natural entitlement through no fault of Netta's own and resenting her as a result, but we soon learn that Netta is quite deliberately exploiting George in a way that is not only opportunistic and manipulative but deliberately sadistic. We see Netta at first only through the eyes of George, who hates and loves her in equal measure, and of course we wonder how reliable a picture he can paint - but when the omniscient narrator steps in to set us straight, we discover only that Netta is even worse than George has imagined.

Not only is Netta spoilt, lazy and spiteful, but also strongly attracted to fascism, bullying, violence and cruelty,and excited by her blackshirt friend Peter primarily because he has been to prison for violently assaulting a left-wing political opponent and for killing a pedestrian while drunk behind the wheel. Whereas George considers himself a liberal and is ashamed by the Munich Agreement, Netta is fascinated by Hitler and Mussolini and 'the uniforms, the guns, the breeches, the boots, the swastikas, the shirts. She was, probably, sexually stimulated by these things in the same way as she might have been sexually stimulated by a bull-fight.'

There is an ominous sense of inevitability to Hangover Square, a looming sense of something terrible about to happen. George's predicament of constantly desperately trying to appease Netta despite his perpetual horror at her appalling behaviour, whilst on another level being convinced that killing her can be the only solution to his problems, seems all too fitting a metaphor for Britain in 1939, with George's internal conflict mirroring the build-up to the devastation of the Second World War.

I feel positively ashamed that it took me so long to get round to reading Hangover Square, as it's a compelling, distinctive novel that gripped me from the very first sentence. I'll definitely be reading Patrick Hamilton's other work in the near future.