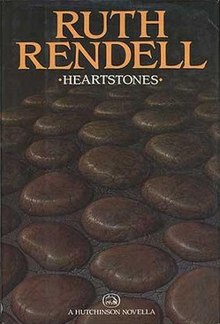 I'm not sure if Heartstones is still in print in the UK. I first became aware of it when I was about 13, when I borrowed it from the library. It's aimed at adults, but by that age I was reading a lot of adult crime fiction and found this story a deeply compelling one, perhaps because the narrator is herself a teenage girl, and I read it several times back then. I hadn't heard anything of it since until I found it on Audible recently, and couldn't resist downloading.

Ruth Rendell was of course known best for her Inspector Wexford novels, but I think some of her best work can be found among her dark, psychological standalone novels and short stories. Length-wise, Heartstones is somewhere between the two; it's a novella of around 90 pages.

The narrator, Elvira, lives in a cathedral close in a university town with her father, Luke, and her younger sister Spinney. Their mother is dead from a (curable, it's implied) cancer after refusing the 'mutilation' of surgery and trying to treat herself with a strict vegetable diet, but Elvira is confident that her own relationship with her adored father, an academic and a clergyman, will be enough to stop him from being lonely. Their bond - intellectual and spiritual as it is, with the two of them studying Latin and Greek in the evenings - is so intense that Elvira is convinced it will endure beyond all else and transcend all other relationships. So when Luke announces his intention to marry Mary Leonard, another academic whose intellect Luke tells Elvira is 'almost equal to his own', Elvira's world is shattered. Meanwhile poor Spinney, in all other ways the more practical of the sisters, is convinced their ancient house is haunted by a terrifying witch and her ghostly cat, and simply wants to live like 'normal people' do.

When I read this book as a child I found it extremely unnerving and creepy, and I have to say that I still find it so today. What I hadn't quite got the full measure of as a child, however, was quite how peculiar Elvira's relationship is with her father and quite how it permeates every anxiety she has about herself. So obsessed is Elvira with her father's love of intellectual and spiritual pursuits above all else that she is desperate to emulate it, to the point where she begins to believe even eating is a crudely physical activity that she must avoid, let alone any possibility of ever having a sexual relationship with a boy. She is furious with Spinney's suggestion that perhaps Luke's attraction to Mary might have a physical element because she fully believes he is above such things; she fears the day when her periods might finally start because she believes any kind of bodily function to be a weakness. Moreover, as an adult reader I found I was much more able to see through Elvira's glowing descriptions of her father and pick up on some additional clues about Luke's true character - not only is his intellectual snobbery insufferable, but there are hints at some unpleasantly controlling behaviour too.

At the beginning, Heartstones has shades of Shirley Jackson's We Have Always Lived In The Castle about it, with its clearly disturbed narrator and the general sense of dysfunction and darkness that hangs over her family. Although the tone does change quite suddenly in the middle of the book when a horrific event gives Elvira a welcome new perspective, this only serves to lull the reader into a false sense of security before the sinister undertones and claustrophobia gradually crank up again. The haunting atmosphere of impending disaster that builds, subsides and builds once again over the course of this short read is an absolute masterclass in atmospheric suspense.

I was prepared to be disappointed by this book upon revisiting it, but if anything, it's even better than I remembered. Get it back in print, please!
Email Post
Labels: audiobooks barbara vine book review family fathers and daughters gothic heartstones mental illness murder novella out of print psychological thriller ruth rendell sisters