A House of Ghosts by WC Ryan 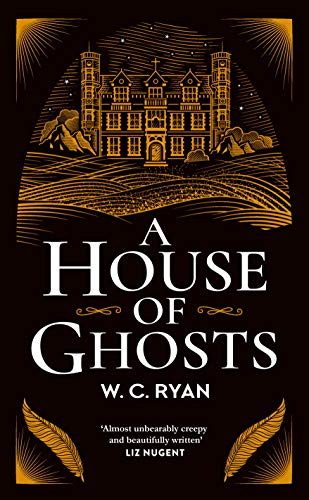 A House of Ghosts is a difficult novel to categorise. Set in 1917 and with a story line focused on wartime espionage, there are shades of John Buchan, while the country house murder mystery element, set on a remote island, has the feel of one of the darker Agatha Christies. Added to this, though, is a sprinkling of the supernatural: a heroine who can not only see ghosts but also has visions of the future which she accesses through a mysterious mirror, and plot involving mediums, seances and shellshocked soldiers.

The basic premise of A House of Ghosts does seem to set it up to be the perfect read for a dark autumn night, and there's certainly a lot to like about it. Kate Cartwright, the psychic heroine recruited by the intelligence service to accompany secret agent Donovan to Blackwater Abbey as he poses as manservant to her ex-fiancé (do try to keep up), is a spirited lead (no pun intended) and there's a pleasing chemistry between her and Donovan that makes them a engaging pair of sharp, pistol-wielding sleuths. The seance scenes, set at time when wealthy families bereaved by the Great War were exploited by charlatans claiming they could contact their dead sons, are well-executed.

That said, I still felt there was something missing. Considering the setting and the subject matter, A House of Ghosts lacks atmosphere. The presence of the ghosts that Kate can see is described so matter-of-factly that there are no real chills to be had, and the magic mirror plot device is so vague - sometimes she sees dead people in it, sometimes it's the future, sometimes it's not the future - that I found it a little lazy. There are also a few clunky lines (please, writers, for the love of god, stop having people see ghosts and then have another character say 'What on earth's the matter? You look like you've seen a ghost': it's one of the worst ghost story clichés there is.

When I got to the end of this story, I felt as if there was more mileage in Kate and Donovan's partnership, and despite the faults of this book I would certainly read more about them. I've no idea if the author is planning a sequel but there was more potential than perfection in A House of Ghosts and I can imagine this being the start of series that would improve with each instalment.
Email Post
Labels: 1910s a house of ghosts book review detective first world war ghost story ghosts medium murder mystery seance spies spiritualism war wc ryan