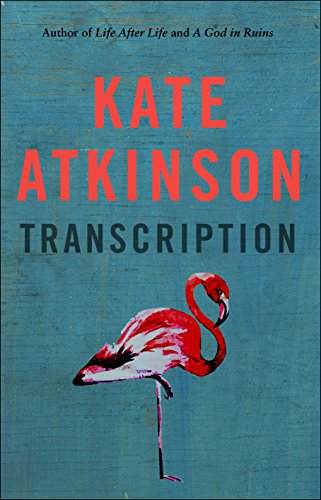 Juliet Armstrong is 18 years old at the start of the Second World War, and her mother has just died. She doesn't have any other family, and nor does she have any money - she's working as a chambermaid to get by - but she does have an excellent typing speed and a gift for lying. It's these things that see her recruited to M15, where she's given a role as an audio typist, transcribing recordings of secret meetings between Godfrey Toby, a secret agent, and a group of fifth columnists who believe Toby to be a Nazi spy to whom they pass information.

Juliet, however, soon becomes more than a typist, and before long she's been given a new name, a lesson in picking locks and a gun for her handbag.

On one level, Kate Atkinson's Transcription is a gripping period spy novel, full of tension and intrigue, but on another, it's a book about identity, belonging and control. Juliet is often flippant, sometimes coldly observant, occasionally mercenary, but at times her vulnerability shows through, and paradoxically, it's perhaps this vulnerability and her lack of the anchor normally provided by family and friends that helps her assume new identities with such ease.

"Don’t let your imagination run away with you, Miss Armstrong," she remembers people telling her. "But why would you not when the reality was so awful?"

Juliet's position as a single woman in the 1940s and 50s is also explored. She observes herself that her career, both during the war and in peacetime, has been shaped by the men she's encountered, and she's well aware that she's often a pawn in their game, and not just when it comes to espionage. The war itself further reduces her options - choice, she notes, is one of the first casualties of war. Everyone around her seems to have secrets, so it's perhaps unsurprising, then, that she becomes attached to the idea of keeping a few secrets of her own - it's one of the few ways she can retain a degree of control.

Throughout Transcription, there are constant references to books, films, plays and acting. Everybody is hiding something, everyone is pretending - even the weather, as the London fog descends, seems determined to conceal and confuse. Juliet herself observes that her MI5 colleagues are "like characters in a Henry James novel. One of the later, more opaque ones, perhaps. Who, she wondered, was the most opaque of them all?"

Like all Kate Atkinson's novels, Transcription is often very funny, full of beautifully observed details and caustic asides. There are also some astute - in the current political climate, all too relevant - analyses of the fine line between nationalism and fascism, and the eagerness of certain groups to look for a scapegoat for every problem their country faces ("women and the Jews tend to be first in line").  It's almost painfully sad at times - yet never in a way that's melodramatic or overblown; this is, after all, a very British novel full of very British characters.

It took me until New Year's Eve to post this review, but Transcription is definitely a late entry in my list of contenders for my favourite novel of year. Read it now.