My Name Is Lucy Barton by Elizabeth Strout 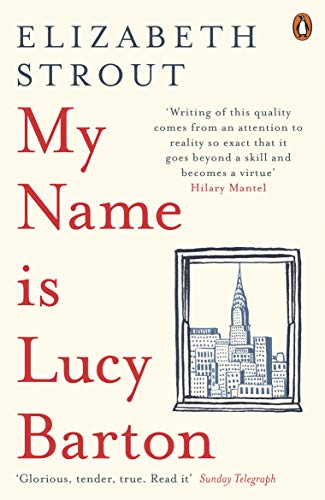 Ill in a New York hospital in the mid-1980s, without her husband or her two small daughters, writer Lucy Barton is surprised one day to find her mother has flown in from the Mid-West and is sitting by her bedside. The two haven't spoken in several years, but despite their long period of non-contact, they cautiously reconnect as Lucy drifts in out of consciousness. Lucy's mother's refusal to leave her daughter's bedside suggests maternal devotion - but Lucy's memories of her childhood paint a different picture, a picture of chaotic poverty and erratic, sometimes abusive parenting. Lucy is now a successful writer but back then 'We were oddities,' she says, and the loneliness that resulted is almost palpable: 'In the middle of the cornfields stood one tree, and its starkness was striking. For many years I thought that tree was my friend; it was my friend.'

My Name Is Lucy Barton is a short, sparse novel and every word, every incident related is carefully chosen. There's a veil of ambiguity over the whole novel that made me constantly question what I was reading. It's clear that Lucy's mother, Lydia, remembers certain things very differently to the way Lucy does. Was Lucy's childhood really as bad as she believes it to have been, or - as someone who tells stories for a living - is she creating an embellished narrative to express some other, even deeper problem? There's an extra layer of uncertainty, too, as Lucy is looking back on her hospital stay and relating her conversations with her mother to us at a much later date, long after the two children she worries about while in hospital have grown up. We're not just relying on memories: we're relying on memories of memories. What, exactly, are the vague, undiagnosed complications she's suffering after her appendectomy - and is it just a coincidence that, having spent her childhood wary of a volatile, disturbed father, she is almost obsessively attached to the kind, calm and paternal doctor who oversees her care? Lucy may have left behind her traumatic past for New York, comfortable affluence and literary acclaim, but she'll never be able to escape her family's influence completely, and her relationship with her own daughters seems far from clear-cut.

It's not often that a novel says so much in so few words. Strout's prose is beautifully economical and Lucy's recollections are shaped by her traumatic experiences, some of which she is clearly repressing, so what's left out is sometimes just as important as what's included. This is a thoughtful exploration of fractured, complicated family relationships and the ripple effect of childhood poverty and neglect through the generations.