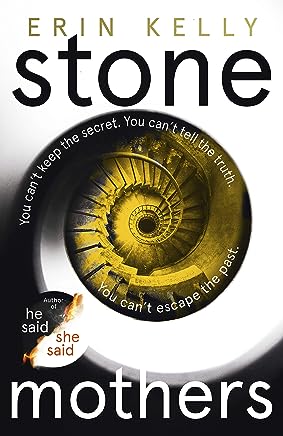 Stone Mothers is a suspense novel by Erin Kelly, author of the excellent He Said/She Said.

Marianne Thackeray's husband surprises her one day with the purchase of a flat close to Nusstead, the Suffolk village where she grew up, so she doesn't have to stay in hotels during the sabbatical she's taking to help her sister look after their ailing mother. It's a luxury show flat in a stunning Victorian building - a converted mental hospital, in fact - complete with access to a gym and a pool. So why is Marianne so utterly horrified? And why is she so intimidated by the presence of Jesse, an old flame from her teenage years who, unlike Marianne, has never moved away from isolated, rundown Nusstead? It's clear that Jesse knows something about Marianne and the old Nazareth hospital - something that threatens to derail her career, her marriage and her relationship with her fragile, troubled daughter Honor. And how is Helen Greenlaw, a formidable 80-year-old politician who now has a seat in the House of Lords, involved?

I don't want to say too much about the way Erin Kelly unpicks the complex tangle of secrets surrounding Marianne, Jesse and the Nazareth hospital, because this is a book that takes sudden and unexpected turns and I'm keen to avoid spoilers - there was more than one moment where I realised this wasn't the book I thought it would be. I will say that it's split into sections, so the full story unfolds in three different time periods and from more than one point of view. It's so tightly plotted in every detail, however, and the different viewpoints so distinct from one another, that it never feels contrived.

Every character is convincing, from the main players to the supporting acts. The hospital itself and the village of Nusstead are almost characters in their own right, the hospital dominating the village as an employer and then haunting it with memories and broken promises after its closure.

While the mystery plot itself is extremely well-constructed, Stone Mothers is also a fascinating exploration of how places can be dominated by a single building and its history, and of what it's like to grow up poor in a tiny, dull community, wanting something more. Marianne's desire to escape Nusstead for a better life, and the degree to which poverty influences the choices she makes, is entirely realistic: I was rooting for her throughout, even when her decisions were questionable. This novel also gives a fascinating - and terrifying - insight into the psychiatric treatment of women in the 1950s, when it was perfectly possible for an entirely sane woman to become trapped in a Kafkaesque nightmare of enforced hospitalisation and severe medical intervention simply for failing to conform to societal expectations.