Dancer From The Dance by Andrew Holleran 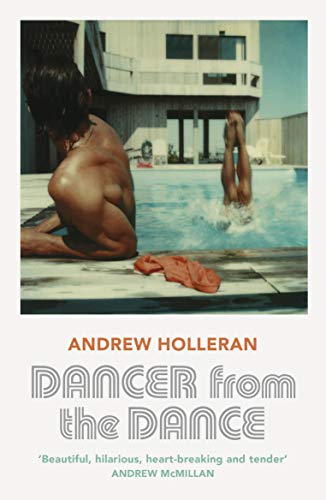 Andrew Holleran's Dancer From The Dance was published in 1978 but I'd never heard of it until I happened to see it in the buy-one-get-one-half-price offer in Waterstones a couple of weeks ago. I don't know if it's been in print constantly since it was published, or whether until relatively recently it would have been shelved in the LGBT sections of bookshops rather than the general fiction shelves, but anyway - I'm so glad I picked it up because it's beautifully written, incredibly atmospheric and evocative and, although it has an aching sadness at its heart, there is a note of hope at the end.

Narrated by an anonymous gay man (about whom we learn almost nothing) Dancer From The Dance is set on the gay club scene in 1970s New York. At the centre of of the story is Malone, a young middle-class lawyer, who after years of struggling with his sexuality leaves Ohio for New York where he abandons his career. Taken under the wing of a middle-aged, drug dealing drag queen called Sutherland, Malone becomes a key figure on the drug-fuelled underground gay 'circuit' of nightclubs, saunas, bath houses and beaches, where his mysterious charm and stunning good looks make him the subject of constant attention and gossip. It's a colourful, chaotic existence, full of parties, casual sex, amazing clothes, all-night dancing and eccentric characters - all of which are richly described in lush detail - but underneath it all, what Malone really wants is to fall in love. Life in gay New York might be one long fabulous party, but what happens when the party's over and it's time to go home?

Holleran's writing is almost as overwhelmingly relentless as the hedonism of the club scene he describes. The book is a dizzying cascade of beautiful prose, even when what he's describing is tragic or sordid; it's an intoxicating tale, and perfect for a hot, sticky summer evening like the one on which I was reading it. One thing that comes across particularly well is the feeling of living in the moment. This book is set before AIDS, yet characters are constantly mentioned in passing as having died - from drug overdoses, from suicide, from fires in underground venues. There's a strong sense that none of the men on the circuit really have much of a future - indeed, several of them of say as much.  There's glitz and glamour and excitement and a sense of carefree decadence, but there's an underlying tarnish to it, a nagging hollowness, which in combination with the character of Malone, self-reinvented and lonely, reminds me of The Great Gatsby. It reads like a love letter to a lost age and a lost New York, where the old industrial districts now overtaken by gentrification are almost deserted, rents are affordable and the city really does never sleep.

Some reader reviews of Dancer From The Dance complain that the novel propagates a stereotype, suggesting as it does that there is an underlying tragedy to being gay. I think this is certainly a valid criticism, but I also think it's important to remember that this is a book of, and about, its time. A man like Malone today would probably have come out to his family and his employer and eventually met a man to whom he'd have ended up happily married, but these simply aren't options for him in the early 1970s. And indeed, the narrator points out that when he attends a gay rights march he only sees four or five men he recognises from the club scene. There are thousands and thousands of gay men in New York, it suddenly dawns on him, who have never danced all night in clubs or been to beach parties at Fire Island, men who are simply living quiet, harmonious lives and having long, happy relationships.

This, I think, is partly where the end note of hope comes from. It's also important that this book is occasionally funny too. Sutherland, for all his faults - and believe me, he really does have faults - made me laugh out loud, and some of the observational detail is sharp and witty.

As I hadn't heard of Dancer From The Dance before, I don't know how wide a readership it's had over the years, but I loved this book, and hope this latest reprint brings it to new audience.