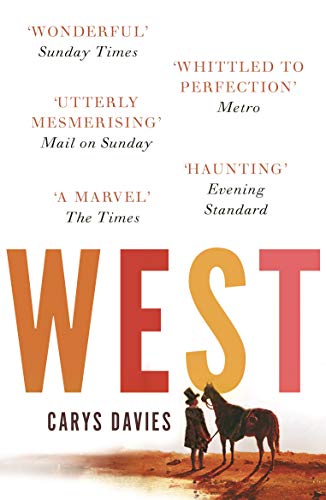 West is a short novel which has the feel of a fable or even a fairy-tale. It begins with Cy Bellman, a widower and frontiersman who makes his living breeding mules in early 19th century Pennsylvania, reading that some giant bones have been discovered in Kentucky. Convinced that these are not fossilised prehistoric remains but the bones of animals that are still living and roaming parts of the American wilderness still uncharted by white invaders, Bellman feels irresistibly compelled to see these giant beasts for himself and sets off on an epic journey to find them. Bellman, whose deluded but dogged persistence puts one in mind of Don Quixote, recruits a Native American boy called Old Woman From A Distance to act his Sancho Panza, and it's through Old Woman that we see the pioneering spirit of the American frontier through very different eyes.

Meanwhile, Bess Bellman, Cy's ten-year-old daughter, has been left behind with her aunt to run the family's isolated mule farm. Bess is fiercely loyal to her benevolent dreamer of a father and convinced he will return from his dangerous mission, but her aunt is less sympathetic, and there's also their neighbour Elmer, a grubby, middle-aged farm labourer who thinks it's time he got himself a wife, to contend with. Elmer's pursuit of Bess is unsettling and predatory.

There are sections from the points of view of Bess, stoically waiting for her beloved father and convinced he'll one day return, Cy himself as he meanders across the frontier, and Old Woman From A Distance. West is both highly descriptive and yet also sparse - the uncharted landscapes of Cy's journey and its incredible hardships are perfectly described but at the same time, entire seasons are sometimes dispatched in a couple of lines. It's an epic distilled down to its barest bones.

Although this book is sometimes wryly funny, we know from the beginning of course that Cy's mission is doomed, and that Bess's faith in him is misplaced. We also know that the very presence of white settlers like the Bellmans have already spelled the end of Old Woman's Shawnee people and their way of life, his tribe now reduced to bartering for trinkets with Europeans who have brought with them guns and infectious diseases. The whole story is, despite its occasional whimsicality, one of extinction and loss.

As such, while it's a beautifully written, thoughtful and unusual novel, it's far from being an uplifting one and despite the occasional witty observations, I found the sense of inevitable failure somewhat hard-going. That said, it's a very short read, so the sadness is tempered by brevity - I enjoyed 150 pages of this story, but 300 would have beaten me.
Email Post
Labels: 1800s america american history book review carys davies fable native american novella old west pioneers usa west wild west