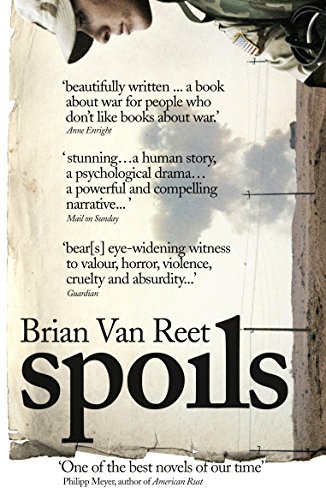 It's very rare for me to read contemporary war novels and when I do, I almost never choose ones about the military itself, so Spoils by former soldier Brian Van Reet was a departure for me. It is, however, billed on the cover as a war novel for people who hate war novels and I suspect there may be some truth in that.

There are three characters whose points of view the novel which is set in the Iraq war of 2003, covers. Cassandra Wigheard is a 19-year-old American soldier who has joined the US Army two years previously, primarily as a means of escape from her chaotic, poverty-stricken family. Abu al-Hool is a middle-aged Egyptian from a wealthy family who has been fighting with the mujahideen in various fields of conflict in the Islamic world, initially against the Russians in Afghanistan and now in Iraq. Finally, there's Sleed, another low-ranking soldier whose role is perhaps to show us how ordinary young men behave when faced with extraordinary circumstances, and what the terrible consequences can be.

When Cassandra is captured by Abu al-Hool's group - indirectly due to a mistake by Sleed and some of his colleagues made while they search for loot in an abandoned palace - she is faced with some difficult decisions and some extreme mental and physical challenges. Meanwhile, Abu al-Hool is disturbed by the increasingly extreme methods of his resistance group, with their new commitment to violent video propaganda and forced conversions.

This really Cassandra and al-Hool's story, with Sleed's occasional appearances taking the form of a sort of simple, ordinary-joe commentary. Sleed's voice speaks its truths in the voice of an average soldier - he's not particularly articulate, but at the same time he gets his meaning across with a disarming clarity.

By contrast, Abu al-Hool speaks with an old-fashioned eloquence. It's a pity that while I found him by far the most interesting character, I also found him the least convincing. We don't learn anywhere near enough about how this one-time spoilt rich boy from Cairo became a jihadi, and his change of heart during the course of Spoils doesn't come with enough exploration either. His precise, almost poetic language singles him out appropriately as being more educated than any of the American soldiers in his captivity, but it's just that little bit too overdone and has the odd effect of seeming to patronise the character rather than elevate him, as if he were the token dapper, educated Arab in a desert war film of the 1940s.

Cassandra's story is an interesting perspective on the unique challenges of being a woman in a war zone. Her captors see her as a valuable prize and there are obvious additional risks for a woman being held prisoner by a group of men, particularly a group of men with preconceived notions about Western women, and yet at the start of the book she also reflects on a brutal attack on another woman soldier by her own fellow soldiers - none of whom were caught and with whom Cassandra might easily be friends.

In a way, Cassandra and al-Hool are two of a kind. Both of them joined a fighting force more to give them a sense of purpose in life or a means of escape than a deeply held belief in a cause ,and yet they're both prepared to kill for it. Both of them, in different ways, find themselves questioning the company they've chosen to keep.

Van Reet is adept at evoking the sights, sounds and smells of a desert war, as well as the banality of the soldiers' boredom and the chilling ways in which ordinary people, whether they're soldiers, rebels or simply civilians caught up the chaos, can find themselves in extraordinary situations. However, perhaps the Iraq War was so extensively covered by rolling news channels beaming live images to our living rooms, I didn't feel I really learned anything new from Spoils. The perspectives in it are interesting, but largely predictable. It's a short, tense read and certainly kept me turning the pages, but I'm not sure it's one I'll remember for years to come.
Email Post
Labels: american fiction book review brian van reet gulf war iraq literary fiction spoils war