You Let Me In by Camilla Bruce 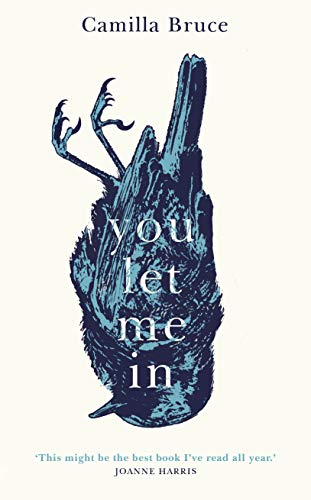 When I first started reading Camilla Bruce's You Let Me In, I thought it was going to be pure folk horror. An elderly romance novelist, Cassandra Tipp - once the defendant in a high-profile murder trial - has disappeared, assumed to be dead. When her niece and nephew arrive at her isolated home to find out the terms of her will, they find a letter which amounts to Cassandra's memoir.

What it reveals is a sinister and often uncomfortable story. As a small child, Cassandra falls under the spell of 'Pepper-Man', an adult faerie creature who attaches himself to her for the rest of her life. Pepper-Man is seemingly invisible to others, initially physically grotesque, and disruptive. His attentions are unrelenting and vampiric - quite literally - and it's Cassandra, naturally, who takes the blame for Pepper-Man's destructive mischief and for the physical injuries he inflicts on her.

And yet when, decades later, Cassandra is accused of brutally murdering her husband, a psychiatrist sent to assess her forms a very different view of what, or who, Pepper-Man might be. Clues planted earlier in the story suddenly start to make sense, and the elements of Pepper-Man's relationship with Cassandra that cause the most discomfiture in the reader are no longer subtext. Is Pepper-Man really the manipulative, oddly co-dependent faerie Cassandra insists he is? Or is he a manifestation of something, or someone, quite different and yet equally disturbing? He might even, to some degree, be both.

Either way, it's impossible not to feel desperately sorry for Cassandra, who one way or another is certainly very much a victim of Pepper-Man's abuse and of her parents' emotional neglect. There are clearly parallels between Cassandra's ties to Pepper-Man and the relationships some people continue to have with toxic, abusive people who formed attachments to them as children. When Cassandra's decisions are questionable or outright unpleasant, it's easy to see that her behaviour is fuelled by trauma. It's also easy to see why her genre of choice, when she becomes a writer, is escapist romantic fiction.

You Let Me In is written in a slightly distanced style, in which Pepper-Man and his faerie kin are the only vividly described characters, rendered with a vibrancy that the other characters lack. Cassandra's home town, or even her home country, are never named, and the story seems to take place in an oddly timeless period. In this sense, the whole book feels, appropriately, like very dark, adult fairy tale, in which the villain looms large in Cassandra's life while everything else fades into the background.

Overall, this is a cleverly-written, literary psychological horror story, full of hints, clues and ambiguities that I found myself pondering for a long time after I'd closed the book. I did find the story disturbing on some levels, as Cassandra is such a young child when Pepper-Man first appears, but equally I'd be interested to re-read it and see if, on a second reading, my conclusions about what is happening to Cassandra were the same.