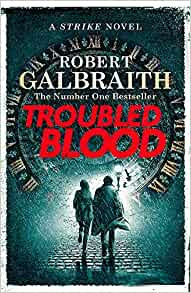 Troubled Blood, as I'm sure pretty much everyone already knows, is the fifth novel in the Cormoran Strike series written by JK Rowling under the pen-name Robert Galbraith. Rowling recently made some comments which many people (including me) considered transphobic, and when this book was published, some people said they found the content transphobic too. Having now read the parts of the book to which those critics were referring, my feeling is that if they'd been written by someone whose views on trans rights weren't known, they wouldn't have been interpreted as transphobic. But now that JK Rowling has apparently decided to start being openly trans-exclusionary, it certainly comes across as, at the very least, insensitive to include a relatively arbitrary (albeit minor), reference to a man disguising himself in a wig and a woman's coat in order to do women harm.

That's pretty much all I'll say on that matter, because much as JK Rowling's views on trans rights disappoint me deeply, they really have nothing to do with the book itself, and it's the book I'm supposed to be reviewing.

The book begins with private detective Cormoran Strike and his business partner Robin Ellacott taking on a cold case: the disappearance of Margot Bamborough. Margot, a GP, disappeared one evening in the 1970s. Was she murdered by Dennis Creed, the sadistic serial killer now serving a life sentence? Or did she simply run away? Her daughter, just a baby when Margot disappeared, is desperate to know, and believes Strike might be her last chance to find out. In the meantime, Robin is going through a tricky divorce from her appalling husband Matthew, while Strike is being bombarded with messages not only from his unstable former fiancée Charlotte but also his estranged rock star father.

Like all the books in the series, Troubled Blood is an extremely well-plotted, labyrinthine mystery with a vast cast of characters, and the ever-present subplot of the will-they-won't-they relationship between Strike and Robin is expertly done as always and almost worthy of a novel in itself. That might be why this book is the size of a breeze-block, although I suspect the novel's bulk has more to do with the fact that JK Rowling has so much clout that she's able to ignore her editors' advice, because Troubled Blood really doesn't need to be 850 pages long. JK Rowling is of course a consummate storyteller and as such, I didn't find the length of the book a drag - just unnecessary. There are incidents, details, conversations and backstory that we simply don't need: JK Rowling as Robert Galbraith is the polar opposite of crime writers like Cara Hunter and Sarah Hilary whose books are tightly written and pacey. I don't especially mind the rambling, as I love Strike, Robin and their world and I'm happy to spend extra time there, but some readers will undoubtedly become frustrated.

Even without the padding, there's plenty of plot to be going on with. The central mystery is pleasingly complicated, with an array of vividly portrayed characters involved. Because the mystery here is a cold case, Strike and Robin have to build their investigation around some unreliable sources of information. The witnesses they interview are recounting memories that are over forty years old, and the notes they have from the police investigation of the time were compiled by an officer who was in the grip of serious mental health problems and convinced of a link between Margot's disappearance and the suspects' zodiac signs. There's an awful lot there for our detectives to unpack, and for me, the zodiac pieces of the puzzle were probably the weakest elements of the story (again, I think a less famous writer's editor would have asked her to say goodbye to them), but I found the characters and their many secrets and lies convincing and absorbing.

The threat posed by men towards women is a continuing theme in Troubled Blood, and not just in the context of Margot Bamborough's disappearance and its potential connection with Dennis Creed, whose crimes were characterised by sexual violence. Robin herself also finds herself up against a lower-level form of oppression from a new colleague, as she is casually undermined and dismissed professionally by men who all to keen to be involved with her personally. There's a particular moment towards the end of the novel where I wanted to cheer, but no spoilers.

If you've read the other books in this series and you liked them, you will like this one too. If you haven't read the others, this isn't the one I'd start with - primarily because the non-mystery plot elements and character development in the Strike books carry over from book to book, so you do need to read them in the right order.

My reviews of the previous Strike novels are here.