The Hoarder by Jess Kidd 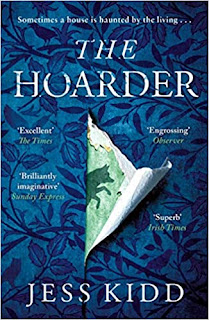 I really loved Jess Kidd's Victorian fantasy Things In Jars, so picked up another of her books, The Hoarder. Like Things In Jars, it's a mystery with supernatural elements and a resourceful heroine, but this time it's set in the present day.

Maud Drennan is a care worker living in a London suburb. At the start of the book, she is assigned to look after Cathal Flood, an unpredictable, belligerent old man whose huge home, Bridlemere, is crammed with a mixture of antiques and junk. It's Maud's job to care for Cathal and to make the house safer and cleaner, but there's a strong suggestion that it's an impossible task. Dead mice lay curled in teacups, numerous cats roam the property and there's a broken mug tree wedged into the toilet - plus, part of the house seems to have been blocked off by what Maud comes to know as the 'Wall of National Geographics'. Estranged from his only son, Cathal appears to have only one friend, and that's an urban fox.

Maud begins to wonder what, exactly, happened to Cathal's wife Mary, who apparently died falling downstairs. Cathal as her death really an accident? Why has nobody mentioned their daughter, who appears to have disappeared? And is there are a connection with a Maggie Dunne, a teenage girl who vanished in the 1980s? Aided by her eccentrically glamorous agoraphobic landlady Renata, a former magician's assistant, Maud sets out to uncover Cathal Flood's secrets.

If you think this sounds a little bit odd, it gets much odder, because Maud is also visited by a number of Catholic saints who appear to her and converse with her (often to comic effect) throughout the novel. Whether this is because Maud is psychic - there's also the suggestion that she is aware of ghostly presences in Cathal's house - is not entirely clear, but we do also learn that Maud has a tragedy in her own past, to which there are frequent flashbacks throughout the story.

The plot of The Hoarder would, I think, work perfectly well as a straightforward mystery. I mean that as a compliment: it would have been easy for Jess Kidd to sacrifice the intricacy of the puzzle itself and to paper over the cracks with Gothic strangeness and supernatural presences, but at no point does this happen. All the elements come together beautifully and everything that Kidd does with this novel, she does it well.

That includes the humour. The Hoarder, like Things In Jars, is as funny as it is dark. Maud's dry humour, the sheer absurdity of Cathal's living conditions, the anachronistic interjections of the saints, Renata and her stubborn determination that the mystery must be solved - all these things and more make The Hoarder an amusing read. And yet somehow the tension, which really does build as the book goes on, is never lost.