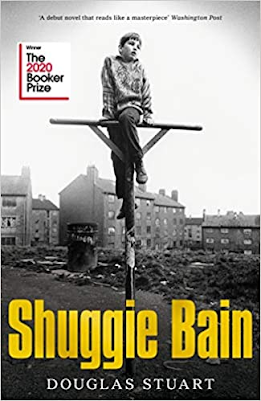 Douglas Stuart's Booker Prize winner Shuggie Bain, set in the most impoverished, neglected parts of Glasgow during the 1980s, is not an easy read. That's not because it's complicated in concept or language - it's a straightforward story, brilliantly told and with a powerful sense of vivid immediacy to it - but simply because it's so relentless in the way it confronts us with the squalid realities of the Bain family's lives.

Hugh 'Shuggie' Bain is the son of Agnes and Shug. Agnes is a lively, fun-loving woman from a Catholic family and is also mother to Catherine and Leek from her first marriage. Big Shug, a Protestant taxi driver, is the man who lured Agnes away from her previous husband, flattering her with his attentions and the promise of a more exciting life. He is, however, a seemingly sociopathic bully: a serial adulterer with a frightening sadistic streak. Before the long, the whole family are living with Agnes' parents in a tower block council flat while Shug works nights and has seedy liaisons with other women. Shug is increasingly abusive, Agnes is an increasingly unstable alcoholic, and Catherine and Leek are increasingly keen to escape. And all the while, quiet, gentle Shuggie simply wants to look after his mother.

At the start of the book, we meet Shuggie aged 15 in the early 90s, working in a supermarket but with aspirations to become a hairdresser, going to school when he can and living alone in a freezing bedsit. His neighbours are mostly drunk middle-aged men, one of whom (it's hinted) is giving him money for sexual favours. We then discover how Shuggie, a gay teenager apparently alone in the world, got to this point.

The book, however, is as much Agnes' story as it is Shuggie's, and for most of the novel they're the only characters who seem to have a truly close relationship. Big Shug abandons the family after moving them to Pithead, a tiny community of miserable houses a long way from central Glasgow built around a colliery that's long since closed down. Catherine doggedly pursues a relationship with a relative of Shug's, quite possibly because it offers her a chance to emigrate, while Leek is withdrawn and losing patience with his mother's drunkenness as he repeatedly defers his place at art school. Shuggie, however, is utterly devoted to Agnes, while Agnes - for all her many faults - is the only person unfazed by Shuggie's social quirks, politely precise speech and effeminate manner. Shuggie is Agnes' protector but at the same time his own fortunes are entirely at her mercy.

Agnes is a Special-Brew-instead-of-food kind of alcoholic, a drinking-all-day-at-home alcoholic, a hiding-cans-of-lager-in-her-handbag alcoholic. Sourcing and consuming alcohol is Agnes' priority above all else, and making sure she has water, toast and a receptacle to be sick into when she wakes up is the last thing Shuggie does every day before taking himself to school - and yet Agnes is rarely grateful. She's certainly not all bad and it seems pretty clear that her addiction is at least in part shaped by poverty and Big Shug's abuse, but never does Douglas Stuart suggest it's that simple. Agnes can often be very likeable and it's impossible not feel tremendous sympathy for her, but she still makes some unforgiveable choices.

If you were thinking this might be one of those books where people in miserable circumstances band together against adversity and have hearts of gold, you'd be disappointed. The community in Pithead is small and close, but it's also fraught with vicious feuds and cruelties. Even the kindest characters in the book - Shuggie's grandparents back in central Glasgow, for example - occasionally do some shockingly awful things and there's rarely any respite from the general squalor.

That means, however, that when there are moments of humour, hope or tenderness in Shuggie Bain, they really do shine - looking for them is almost like panning for gold, sieving patiently through silty grit for something beautiful. Despite the grimness, this book is occasionally very funny - and despite everything Shuggie goes through, I finished the book with a sense of hope, feeling that one day, somehow, he was going to be OK.