The Golden Rule by Amanda Craig 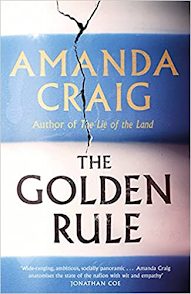 Amanda Craig's The Golden Rule has as its basic premise a classic 'Strangers On A Train' scenario: two characters meet on a long train journey and realise their problems could be solved if they each murdered the person making the other's life a misery.

Hannah, the protagonist, is struggling to support herself and her young daughter in London by working as a gig-economy cleaner, while her abusive, wealthy ex-husband Jake withholds support payments and threatens to make them homeless. Travelling to her childhood home in Cornwall in the wake of her mother's death, Hannah is offered a seat in First Class by glamorous Jinni, who is going through an appalling divorce from Con, her violent Cornish husband. Confused, desperate and angry, Hannah agrees to rid Jinni of Con if Jinni will kill the loathsome Jake. But when Hannah, armed with a taser, goes to Con's rambling ancestral home, nothing is as she expects. The owner of decaying mansion is actually called Stan, for a start, and he's not the charismatic tech millionaire Jinni has described.

If you boil The Golden Rule down to the bare bones of this set-up, it's a psychological thriller, but this would do it a disservice. It's also a novel about a divided Britain. There's a huge gulf in social class between Hannah and her ex-husband Jake: while Jake's family are super-rich and mingle with the aristocracy, Hannah grew up in a council bungalow and her Cornish family are constantly struggling to make ends meet while the likes of Jake's family buy up properties for second homes. Power imbalances surface in relationships throughout the novel - in Hannah's and Jinni's relationships, but also in that of Hannah's neighbour, living in hiding from her dangerous husband. It's also key to the identity of Hannah's father, a man she's never known - the closest thing she has to a father figure is the man who owns her home town's only bookshop.

Hannah's love of reading is not only a metaphorical escape but also a literal one that's her ticket to a place at university - and yet at the same time, it's also what draws her to charming, witty Jake, their relationship reminding her of one from a Jane Austen novel. What results is a fundamentally unequal marriage which, when it ends, leaves Hannah not only penniless but powerless, and it's telling that Hannah has all but stopped reading for pleasure at the beginning of the story when she's at her lowest ebb. When Hannah arrives in Cornwall and arrives at Stan's crumbling mansion, there are times when we might wonder if she's swapped an ill-advised Austen-inspired plot-line for a an equally ill-advised Bronte-inspired one. But The Golden Rule is a better and more subversive book than that.

I found The Golden Rule a deeply satisfying read. It blends genres in a way that takes the best elements of all of them, and everything comes together to form a whole that's greater than the sum of its parts. It's a clever portrait of contemporary Britain which, despite its subject matter, has a genuine warmth at its heart.