A Line To Kill by Anthony Horowitz 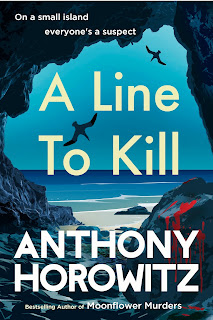 The third book in Anthony Horowitz's Hawthorne and Horowitz series, A Line To Kill, was perhaps the release to which I was most looking forward this year. I loved the two preceding books, The Word Is Murder and The Sentence Is Death, which feature private detective Daniel Hawthorne and - in a pleasing and original twist - the author himself as the writer who has made a deal with Hawthorne to document his investigations in a series of books. This means that the Hawthorne and Horowitz books are not only the story of Hawthorne investigating a crime, but also the story of Horowitz writing the story of Hawthorne investigating a crime. It's all quite meta but Horowitz somehow carries it off with a lightness of touch that somehow makes it all seem perfectly natural.

A Line To Kill sees Hawthorne and Anthony (for clarity I'll call him Anthony here when I'm referring to the character) travelling to Alderney for a literary festival at which they'll be promoting the first book in their series. Anthony is surprised at Hawthorne's eagerness to attend - after all, it's not as if Hawthorne enjoys socialising, and when he has he ever done anything without an ulterior motive?

This being a murder mystery, it's obviously no spoiler to reveal that there's a death shortly after the duo's arrival, and the case has classic elements of Golden Age detective fiction: a wealthy and odious victim for whose murder almost anyone could have a motive, and a tight-knit, isolated location which the suspects are unable to leave. I've been to Alderney, and I think Horowitz captures its landscape, atmosphere and community very well. It's a beautiful island and a lovely place to stay, but it does have a dark wartime history and there's a strong sense that everyone knows each not only each other but also each other's secrets. There's a running gag about everyone being keen to inform Anthony that there's never been a murder on Alderney before, and although it made me laugh, it was also very in line with what I've observed about island communities - everyone's proud of the place and keen to impart their knowledge of it to visitors. It's also clear that while everyone's horrified by a murder in such a small community, there's also an element of guilty excitement about it.

Every character in A Line To Kill is sharply observed, sometimes comedically so, but never at the expense of plausibility. The plot, as I've come to expect from this series, is hugely enjoyable and a proper old-school mystery. But at the heart of the book is the relationship between Anthony and Hawthorne and that, for me, is what makes this series special.

Hawthorne himself is a gem of a character. An odd mix of innocence and darkness, he comes across to Anthony as socially awkward and downright obnoxious, but - rather like a stroppy teenager who grunts at his parents but is charmingly polite at his friends' houses - he seems to manage to win over other people in way that simply infuriates Anthony all the more. He doesn't have any friends, but seems perfectly comfortable on being interviewed in front of a live audience. Secretive, mistrustful, blind to other people's feelings and with apparently only two interests (a book club he doesn't enjoy very much and a childlike obsession with making model aeroplanes). Hawthorne is the ultimate puzzle and one that Anthony is increasingly desperate to solve, but we get the strong impression that the mystery of Hawthorne will be prove more complicated than the solution to any whodunnit.