Home Before Dark by Riley Sager 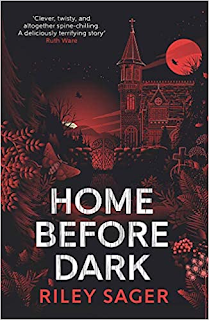 I constantly see ads on Amazon and Goodreads for Riley Sager's horror novels, but only recently got round to reading one - Home Before Dark, a good old traditional American haunted house tale - mainly because I was interested in the premise.

Maggie is the daughter of Ewan Holt, a journalist who many years ago wrote a book about his family's experience of moving into a haunted house. House of Horrors is sold as fact and makes him - and by extension, Maggie - famous, but Maggie hates being known as the kid who saw ghosts, particularly as she knows full well Ewan made the whole thing up to bridge the gap between his career in journalism and his ambition to become a novelist.

When Ewan dies, she's stunned to learn that he remained the owner of Baneberry Hall for the rest of his life, and that consequently she's inherited it. Maggie renovates houses for a living, so the logical thing for her to do is to spruce the place up to sell it on, but her mother Jess, long divorced from Ewan, immediately offers to buy it from her instead. Why doesn't Jess want Maggie going to Baneberry Hall? Why didn't Ewan sell it? And there's another mystery too: what happened to Maggie's former babysitter, who vanished from the area on the same night the Holt family left Baneberry Hall for good?

The clever thing about Home Before Dark is the way two stories are woven together, with Maggie's present day narrative alternating with Ewan's account of their time at Baneberry twenty-five years ago as told in his bestselling book. Both stories are certainly eerie enough - snakes rain down from the rotting ceiling, an old vinyl record plays of its own account, Maggie is troubled by nightmares both as an adult and as a child, and it's never certain who can or can't be trusted. The plot is a blend of ghost story, whodunnit and psychological thriller, and certainly kept me turning the pages.

I'm always interested in what happens to people who are caught up in well-publicised, supposedly supernatural incidents, and in the lives of 'haunted' houses. But in reality, the houses usually go on to be perfectly ordinary homes. The notorious Amityville Horror house in Long Island has been peacefully occupied ever since the Lutz family fled from their supernatural nightmare - although it is blurred out on Google Street View, which suggests that the only disturbances there today are visits from horror fans and ghost hunters. The notorious Enfield Poltergeist house is still right there on Green Street with people living in it. But in Home Before Dark, Ewan Holt decides to the keep the property - even though it would almost certainly have been bought by someone more sceptical had he put it on the market, and that's key to the mystery.

This book isn't as strong on character as it could be, and I found Maggie's interactions with Baneberry Hall's good-looking caretaker tiresome and hackneyed. Even Maggie herself is a character I couldn't imagine existing anywhere outside this story. But it is an enjoyable, page-turning story. It reminded me a lot of the horror paperbacks that were everywhere in the 1980s, always to be found in charity shops and constantly passed round the class at secondary school along with Flowers In The Attic - and I absolutely mean that as a compliment.