Mr Wilder & Me by Jonathan Coe 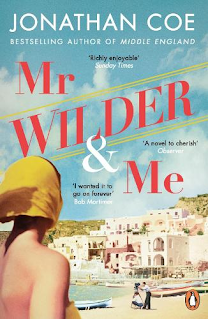 As I'm sure I've said before, Jonathan Coe is one of my favourite living authors, so I always approach his work with high expectations. In his most recent book, Mr Wilder & Me, he returns to some themes that will be familiar to his readers - memory, film and formative experiences.

Calista, a composer of film scores who is originally from Greece but now lives in London, is in a career slump in her late 50s. Her twin daughters are at turning points in their lives - one about to emigrate, the other accidentally pregnant and unsure about keeping the baby. Feeling disempowered both as a parent and as a composer, Calista thinks back to a time that shaped the rest of her life: her first job, working for the film director Billy Wilder.

Upon being introduced to Billy Wilder and his writing partner Iz Diamond while travelling in America as a student, Calista has no interest in film and has to learn entries from Halliwell's Film Guide in order to converse about it, but her language skills see her falling into a temporary position as a Greek-English interpreter for Billy while his picture, Fedora, is filming in Corfu. She then travels with the production to Germany and France, both locations that have a particular resonance for Billy, a European Jewish man forced to flee both countries during the Second World War.

Fedora was Billy Wilder's penultimate film, financed by German producers in the absence of interest from Hollywood. Wilder's films include acclaimed classics like Some Like It Hot, Double Indemnity and Sunset Boulevard, but Calista meets him in the late 1970s as his popularity is waning and his style of film-making falling out of vogue in favour of grittier dramas and brasher, more outrageous comedies.

Billy is known for directing stars like Tony Curtis and Marilyn Monroe, while it's young, edgy Method actors like Pacino and De Niro who are now box office gold. It's clear in Mr Wilder & Me that Billy's career is at an end, and it's no coincidence that Fedora is also about an ageing entertainer desperate to stay relevant - and small wonder, of course, that Calista is returning to her memories of him as she reaches a similar point in her own life.

There's a slightly wistful melancholy about this portrait of a man whose art has fallen out of favour, but because we're seeing it through Calista's eyes, it's never bitter or depressing. Calista is young, full of optimism and enthusiasm, excited by the world of film-making and fascinated by the partnership between Billy and Iz. Everything Calista is experiencing while working for Billy Wilder is new to her, and both Iz and Billy seem to be quietly energised by her presence. It's also worth noting that they are kind to her in a completely genuine, and egalitarian, way - given what we know about powerful men and their treatment of young women in the film industry, the lack of ulterior motive here is hugely pleasing.

As Calista looks back on her early career, we also look back to Billy's own younger years. Immediately after the war, Billy Wilder was commissioned to direct and edit a short documentary about the horrors of the Nazi concentration camps - a horribly difficult experience for any film-maker, but almost unimaginable for a Jewish refugee whose family were left behind in Europe. Billy is only able to process his grief and guilt through a camera lens, hopelessly scouring hours of harrowing footage for glimpses of familiar faces, and that long-buried sadness, perhaps, is starting to leach into his later films.

Billy's status as a European director primarily known for making very American films provokes wider thoughts about the relationship between Europe and America, and I don't think the novel would work so well if Calista wasn't also European. Mr Wilder & Me is full of interesting, nuanced relationships, in fact - Billy and Iz, who know each other better than they know their own wives, Calista and her first love, and later, Calista and her daughters.

Mr Wilder & Me feels to me like a book that's also about beginnings and endings - formative experiences and their lasting legacy. It's sensitive, insightful and understated, and I found it tremendously atmospheric, as if I was watching the story unfold on sunny, age-tinted film from the 70s. It feels like a love letter to many things - to Billy Wilder, to film-making, to youth, to Europe - and I thoroughly enjoyed every page.