Babes In The Wood by Mark Stay 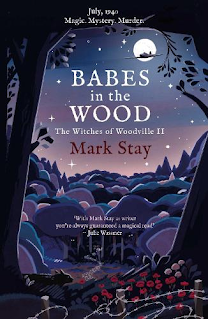 I loved Mark Stay's previous book in the Witches of Woodville series, The Crow Folk, so I was excited to see that the next instalment was out.

Babes In The Wood returns to Woodville not long after the events of The Crow Folk - events, of course, that most of Woodville doesn't actually remember. Faye Bright, a cheery, forthright and teenager who lives and works in her widowed father's village pub, is coming to terms with being a witch. In fact, she's so at home with the idea at this point that she's irritated not to be taken more seriously by the more experienced members of the Woodville coven.

The Woodville series is set in the early 1940s, and the Second World War is in full throttle. At the start of the book, three German Jewish refugee children arrive in the village as part of the Kindertransport. Chaperoned by their cousin Klaus, barely more than a child himself and the only one of the group who speaks fluent English, the children are staying with Lord and Lady Aston and their rakish son Harry at their manor house. But when Faye shakes Klaus's hand she has a terrible premonition that leads her to believe he and his cousins are in terrible danger - and later she's convinced that the whole of Britain could be under threat too.

Faye, as always, is both kind and determined - a pleasing balance of practical and soft-hearted, although she still makes plenty of mistakes - not just with her magic, but in her social life too. Charlotte and Mrs Teach, the village witches charged with taking Faye under their wing, are a formidable pair of mentors, and while the mismatched trio constantly bicker, they're also fiercely loyal and protective of one another. Supporting characters from the previous book make a welcome return, including Faye's father Terence and her old friend Bertie, who continues to harbour romantic ambitions towards her.

Magic, as you can imagine, has its uses during a war, regardless of what side you're on, and there's an ominous notion throughout Babes In The Wood that its power is about to fall into the wrong hands. The Woodville Witches are clearly going to be become embroiled in events of global significance, and at the same time Faye, who has a natural inclination to protect the vulnerable, is determined at all costs to keep the refugee children safe.

Babes In The Wood is, like its predecessor, a tremendously charming book: warm, funny and full of eccentric characters. But despite its cosy feel, it also doesn't shy away from genuine excitement, tension and horror. The villains in this book are deeply unpleasant and their methods ruthless, and there are several moments that are deeply moving - I welled up more than once. Lovely stuff, and I can't wait to return to Woodville for book three, due out in July 2022.