The Sea Change and other stories by Helen Grant 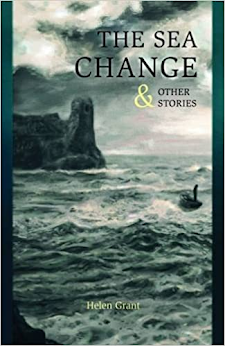 Helen Grant is one of my favourite contemporary authors of eerie, unsettling novels of the supernatural, so I was excited to receive a copy of The Sea Change and other stories, a collection of short fiction originally published in 2013 and now available in paperback.
There are seven stories in the collection, all of them with an unnerving edge. For chills, Helen Grant's work often relies as much on the implied and imagined as it does on what she chooses to describe, and these stories are a masterclass in knowing what to leave out.
The title story, for example, in which a happy-go-lucky diver starts to be strangely affected by his time in the water, succeeds precisely because we don't see whatever it is that lurks in the depths. In The Game of Bear, the horror that scuttles through the corridors of the home of the narrator's old friend Henry Purdue is a person-sized 'thing' that has a lurching gait and 'something odd about its limbs - either there were too many joints or some of them bent the wrong way [...] with the ends of the limbs scrabbling energetically at the walls'. We don't know how many limbs there are, what is at the 'ends' or what the creature's face looks like, but frankly, it's much creepier because we don't. The sense of disconnection and unnaturalness - the sheer wrongness of the thing - is made more powerful by its mystery.
The Game of Bear is one of two stories here with a connection to the great MR James, and was inspired by the opening fragments of a story begun by James but never finished. The other is Alberic De Mauléon, a prequel to James`s classic story, Canon Alberic`s Scrap-Book. Both do absolute justice to James and are remarkably true to his style and technique without ever feeling like pastiche.
If you`re even slightly familiar with German folklore and fairy tales, you`ll be aware that these are packed to the sinister rafters with hideous creatures that terrorise children, and this is very much the premise of Grauer Hans, in which a woman is haunted by a strangely insidious, duplicitous figure who can only be warded off with a strange song - if you can remember the words. It`s a truly frightening tale of a vile creature intent on luring away children from their bedrooms, but it`s more than that: it`s also a reflection of the nagging anxiety that almost every mother feels over the need to keep their children safe. When the narrator`s toddler happily beams at the jolly figure who appears at her window, the narrator realises she has no way of warning the child about what he really is - in that sense, Grauer Hans is almost akin to those smiling strangers we were all told to run away from as children if they offered to show us some puppies.
Other tales in the collection include Self-Catering, a comic tale of a pompous man with a fondness for classic horror and a bitter grudge against his boorish colleague that takes an unexpectedly dark turn; Nathair Dhubh, in which an anxious, panicked tension builds as a climber loses sight of the companion roped to him when a sudden fog engulfs a Scottish mountain peak; and The Calvary at Banská Bystrica, an ominous story of a pompous art critic who comes to a horrific end when a young woman takes him to see an apocalyptic fresco in a hilltop church. This last story might be my favourite of them all, although there isn't a dud among them: each is a meticulously crafted tale or terror.
The inherent challenge of a short story is building atmosphere and establishing characters, without the luxury of 300 pages to play with - plus, the plot of a short story really has nowhere to hide. The short story writers I most admire are the ones who can build and maintain momentum and paint a complete picture in this disciplined and somewhat unforgiving form: pleasingly, this collection really does deliver. There's a strong sense of locale in each story, which is particularly notable in Nathair Dhubh and The Calvary at Banská Bystrica, and the whole collection is quietly impactful in that memorably uncanny manner of the best supernatural fiction.
Email Post
Labels: book review helen grant horror mr james short stories small press speculative fiction supernatural the sea change and other stories weird fiction