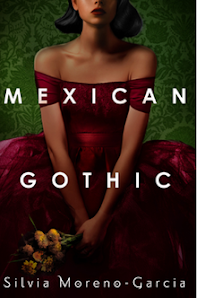 I doubt anyone who regularly visits my blog is surprised to learn that I love a good old gothic tale and, as the title suggests, Silvia Moreno-Garcia's Mexican Gothic has all the classic ingredients of a traditional gothic narrative. An old, isolated house, a weirdly insular family, mental illness, sinister servants, tuberculosis, a young woman in peril, a cemetery, gloomy weather conditions - you name it, Mexican Gothic has it.
The Mexican setting, however, is a nice departure from the norm. The story begins in the early 1950s, when Noemi, the daughter of a wealthy industrialist, is whiling away her evenings at dances and cocktail parties in Mexico City while she tries to decide what to study at university. It all feels very glamorous to me - hot, sultry evenings, convertibles, beautiful clothes and so on - and I would actually happily have read a book all about that, so if Moreno-Garcia fancies a go I'll be all over it. But of course, this is a gothic novel so things soon change.

Noemi's father has received a letter from Noemi's cousin, Catalina, who has recently married Virgil Doyle, a handsome Englishman whose family once owned a silver mine that has now closed down, and the nearby town that was once home to the workers, El Triunfo, has been largely abandoned. Catalina once lived with Catalina's family, so they used to have an almost sisterly relationship, but they haven't seen each other since the marriage and Noemi doesn't really know Virgil at all. Catalina's letter is disturbing: she seems fearful and incoherent, convinced that she is in danger, and not at all like the Catalina he and Noemi know and love. We're told that Catalina is suffering from tuberculosis (the most gothic of all the diseases) so could this be fever-induced delirium, or is she mentally ill? In a bid to check on her cousin and offer to get her some medical help, Noemi travels to the Doyles' mansion in the mountains to spend some time with her and talk to her new husband.
It's at this point that the story starts its rapid ascent to Peak Gothic. The house is damp and much of it is in poor repair. The few servants are silent and mysterious. Catalina and Virgil are living with Virgil's aunt, Florence, and his cousin, Francis, and the whole household seems in thrall to Howard Doyle, an elderly, tyrannical patriarch nearing his death. Florence tells Noemi that she isn't to run baths at certain times or use a lot of hot water, that she must keep the lighting dim. She must also under no circumstances light a cigarette in the house, which would be a reasonable request of a guest today, but in the 1950s, when everyone smoked constantly? Unthinkable.
At the start of Mexican Gothic, Noemi perhaps seems rather spoilt and self-centred, with a confidence that borders on arrogance, but when she's removed from her frivolous life as an urban socialite that her wilful assertiveness proves to be a tremendous asset. Suddenly, her refusal to do as she's asked, even as guest in someone else's home, makes her a determined and resourceful protagonist. She appears to have at least some support from Francis, the one non-terrifying member of the household, but does he have the courage to take her side against his sinister family?

I won't reveal any more the plot, but it's no spoiler to say that it's every bit as mad as you'd expect from the heightened gothic atmosphere. It's crying out to be adapted for cinema by Guillermo del Toro - it does remind me in some ways of Crimson Peak. But amid the gothic excess, Moreno-Garcia also explores some social, historic and political issues: feminism and patriarchy, colonial exploitation, class and heredity, and more.

I did feel the plot became borderline ridiculous at one point, but I found the whole story so atmospheric and enjoyable that I was able to suspend my disbelief. If you like a slow-build gothic mystery and an unusual setting appeals to you, I'd recommend it.
Email Post
Labels: book review gothic horror mexican gothic mexico silvia moreno garcia supernatural