What Happens Now by Jeremy Dyson

Jeremy Dyson is one of the co-creators of The League of Gentlemen, although you won't have seen him on screen because he's the mysterious non-acting one. As you might expect, then, What Happens Now opens with a comically sinister scene in which a relatively mundane event terrifies a child. It's an excellent beginning, and establishes a recurring theme of the book: childhood fears of, on the face of it, relatively minor incidents having a long-lasting psychological impact well into the adult lives of Dyson's characters.

This aspect of Dyson's work reminds me a little bit of Jonathan Coe, who happens to be one of my all-time favourite authors. Coe's characters are often haunted by shadowy recollections of childhood trauma, sometimes in ways even they don't fully understand, and as Dyson's story unfolds, it's clear that Alistair Black and Alice Zealand, who once acted together as teenagers in a TV drama, have been irrevocably affected by their experience. The question is, why? 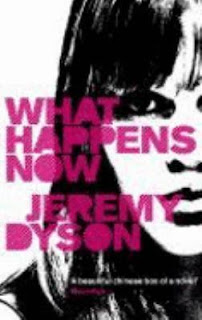 One of the beautiful things about Jonathan Coe's work is the exquisitely-meshed perfection with which every delicate cog of his stories has slotted elegantly into place by the time his books end, and I have to say that Dyson doesn't quite achieve this. Mysteries are mostly cleared up, but things to which considerable time is devoted in the novel are not what I would call properly resolved, or prove to be simply less significant than expected. In this kind of novel, this just makes them seem superfluous, perhaps a little self-indulgent on the author's part. I wanted to find out more about certain aspects of Alistair's life, for instance, and Alice's on-off relationship, as an adult, with a celebrated young artist simply didn't have enough background or connection to the rest of the story beyond serving as a fairly heavy-handed illustration of her apparently inability to commit. One or two characters are also a little overdone: Steve, the cocky co-star opposite whom Alistair and Alice act as teenagers has been cranked up just a couple of notches too high, so a pivotal event involving all three didn't chill me quite as much as it probably should have done simply because I couldn't really believe in Steve as a character.

However, that's not to say What Happens Now isn't an immensely engaging and often fascinating read, and nervous, shy, perpetually embarrassed Alistair Black, with his ever-increasing neuroses, is an entirely believable and largely sympathetic character - which makes the novel's conclusion all the more affecting. What Happens Now is a novel full of misfortunes and misunderstandings, some trivial and some devastating, with an oddly wistful but always unsettling undertone.


***
Some weeks ago a nice gentleman from Twitter, Mel Gomes, asked me if I'd like to write some features on books for his website, The Substantive. I jumped at the chance, and have agreed to contribute regular pieces about selections of books on particular themes. So far, I've done Winter and Love. You can read those articles here if you're so inclined.
(Hear that noise in the distance? That's the sound of me blowing my own trumpet.)
Email Post
Labels: alice zealand alistair black black comedy child actors jeremy dyson jonathan coe league of gentlemen what happens now