What They Do In The Dark by Amanda Coe

What They Do In The Dark by Amanda Coe is actually quite funny at times. It also does a nice line in 70s childhood nostalgia, with lots of references that will make people start to wax lyrical about Spangles and clackers. Sounds fun, does it? Well, don't be fooled. It isn't.

That's not to say that What They Do In The Dark isn't an excellent book. The writing is brilliant throughout; the characters are utterly believable; the setting and period are evoked with a skill. And it's gripping: even when frankly, not a great deal seemed to be happening, I found it impossible to put down. Three ten-year-old girls, all leading very different lives indeed, are connected by circumstance over a period of several months in a Yorkshire town. There's Gemma - bright, middle-class and popular and, in a material sense at least, perhaps a little spoilt. Then there's her classmate, Pauline. Pauline is the school bully, horribly neglected and living in squalid conditions with a violent, drug-using extended family. And finally, Lallie Paluza, a young TV star of the Lena Zavaroni ilk, whose comic persona and typically childish attention-seeking are tempered by an eerily knowing maturity. Gemma and Pauline, while barely even qualifying as 'friends', are thrown together by coincidences and conflicts. Lallie's link to them is more peripheral - she appears to live her life entirely in the company of adults - as her first straight acting role, in which she plays the victim of an implied paedophile in a creepy arthouse production starring Dirk Bogarde, is filmed in the other girls' home town. 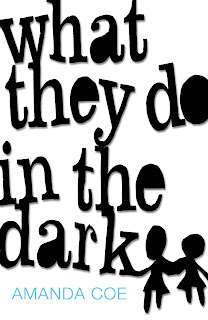 Superficially, the three characters have nothing in common, but it's what links them  on a deeper level that brings an inevitable darkness, an itchy, fidgety, uncomfortable atmosphere, to the book. All three girls are, to varying extents, victims of abuse. Pauline is an obvious victim of cruelty, and her home life is an appalling series of mounting horrors; it almost comes as no surprise to learn that she's already starting to follow in her prostitute mother's footsteps. Gemma, on the other hand, leads an almost over-protected life, and yet still finds herself at risk from a particularly insidious predator. And Lallie ... well, there are a lot of unanswered questions on that score, and she does have a diminutive adult stand-in who, from a distance, can easily be mistaken for her. But it's up to the reader to make up their own mind about Lallie, whose ability to play all too convincingly the part of a confused child victim of a middle-aged man's grooming is notable.

This is a book, then, about the abuse of little girls, and its consequences, which are horrific. The build-up of events is gradual. There are hints, suggestions and clues that continue to mount until the atmosphere becomes so tense and oppressive that it's almost as if there's a dank, foetid cloud hanging over the novel, before it reaches shocking - and for me, almost unreadably unpleasant - conclusion. The ending is entirely unexpected, almost jaw-droppingly so, and yet at the same time, seems perfectly believable, and it's this sickening feeling of credibility that makes it so difficult, so uncomfortable, to accept.

As far as the author's craft goes, I can barely fault What They Do In The Dark. There is a subplot involving a young Hollywood film producer, visiting the UK to consider Lallie for a role in a Disney film, which, while at times key to the chain of events that form Lallie's storyline, seems perhaps more detailed than necessary at times, but apart from that, I can find nothing about the writing of this book to complain about. Coe's use of varying points of view - Pauline and Gemma themselves, most obviously, but also Lallie's agent, and an ageing character actress who observes the child star on set - is extremely effective and the whole novel is a masterclass in pace and plot. The subject matter, too, is probably extremely worthy: there are valid and indeed essential points made by this novel, and in an extremely powerful way. But equally, it's a disturbing, uncomfortable read after which I couldn't sleep and wanted to scrub my brain clean with Domestos. I think we can safely say I shan't be reading it again.

Email Post
Labels: amanda coe books gemma lallie novels about child abuse novels about paedophilia pauline reviews what they do in the dark