A Kiss Before Dying by Ira Levin

The title of A Kiss Before Dying conjures up, for me, an image of a 1950s pulp thriller with a fabulous, stylish cover featuring a woman who looks like the hourglassy one from Mad Men and a man in a fedora concealing a gun. And indeed, that's pretty much exactly what A Kiss Before Dying is, on the face of it - it's a crime novel published in 1953 about a handsome psychopath who preys upon a series of rich young women in a bid to secure a stake in their father's fortune. Google Image Search informs me that I wasn't even far wrong with the original cover: 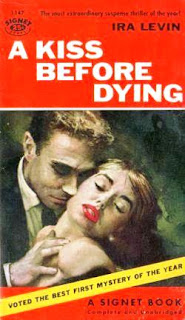 And yet, while A Kiss Before Dying, by the late Ira Levin, has all the signature style and undeniable glamour of a somewhat noirish American thriller, not to mention a characteristically sensationalist plot, there's plenty to set it apart.

(Oh, and disappointingly, today's cover actually looks like this. Nowhere near as much fun, but ultimately probably more credible): 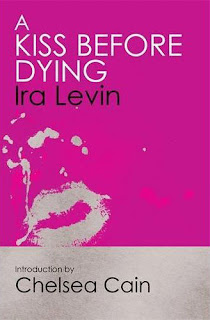 The story begins with an unnamed young man plotting the death of his fiancée, Dorothy Kingship - a pretty, rich, naive college student. Having planned to marry her to get his hands on some of her father's money, he's furious to learn that she's pregnant. This being somewhere around 1950, this seems likely to force them to marry immediately and incur the wrath of Dorothy's father, who will almost certainly disinherit her as a result, leaving the nameless protagonist poorer than ever and saddled with a wife and child he never wanted as well as ruining his master-plan. Consequently, when pills from a backstreet abortionist fail to work their magic, the only alternative, he feels, is murder.

It's chilling, tense and (like the much-maligned and underrated 1950s shocker, Peyton Place) remarkably evocative of its time and setting. And it's a decent enough thriller plot, of course. All pretty straightforward...

But then, Levin pulls a particularly clever trick. He switches the novel's point of view. Suddenly, we're in the position of Ellen Kingship, trying to discover who has wronged her younger sister. All she knows is that she has to look for a handsome, charming blond college boy in his mid-20s (his academic career having been interrupted by World War II, of course). There are a number of contenders. And it could be any of them. Terrifyingly, any of these affable, bright, all-American boys Ellen meets could have the mind of a psychopathic killer - a mind into which we, as readers, already have a horrific insight.

Those familiar with Ira Levin's best-known works - Rosemary's Baby, The Boys From Brazil, The Stepford Wives, all of which became immensely successful films - will know that his books tend to stretch plausibility a little, and yes, A Kiss Before Dying does this too. But somehow, it's all so neatly plotted in every detail, with every character so absolutely spot-on for the roles they have to play in the story, that I found myself believing every word. It may be pulp-influenced at times, and at times it's a wee bit overblown, but the writing is so sharp that it simply doesn't matter, and Levin has been astute in building his characters convincingly to give them credible motivation.

As in his other books that I mentioned, Levin uses A Kiss Before Dying to tug at a sinister, dysfunctional thread that unravels the fragile tapestry of a classic American setting to reveal a dark, calculating cruelty lying beneath. Nobody and nothing are what they seem in Levin's novels, and reading this book is like stepping into the world of a stylish Hitchcock film full of beautiful women, fabulous outfits, ever-building tension, surprise plot twists and ambiguously charming men who may or may not be calculating killers.
Email Post
Labels: 1950s a kiss before dying american fiction bud corliss crime dorothy kingship dwight powell ellen kingship gordon gant ira levin murder noir psychopath pulp review reviews thriller