Among Others by Jo Walton

It's quite common in fantasy literature for a child to think they are 'normal' and then suddenly discover they're actually magical, at which point they're plunged into a magical world of which they initially struggle to make sense.

In Jo Walton's Hugo and Nebula award-winning novel Among Others, however, it's almost the other way round. Teenage narrator Mori comes from a family of witches and has spent her childhood talking to fairies with her twin sister in the Welsh valleys. But at the start of the novel, recently bereaved and estranged from her terrifying mother, Mori finds herself in the care of a father she's never met and sent to an English boarding school where magic is in decidedly short supply. 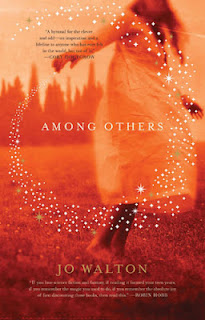 If this makes Among Others sound like a cutesy, comic children's book, don't be fooled. It's aimed at adults (although I imagine many teenagers would thoroughly enjoy it) and although it is indeed funny in places, its overall tone is wistful and occasionally very sad, although there's a pleasing undercurrent of hope throughout. Obsessed with fantasy and sci-fi novels and academically gifted, but with an eccentric perspective that makes her awkward among her peers, it's hard not to love Mori as she narrates her story through a series of diary entries, even when her decisions are dubious.

And yet, the thing that I enjoyed most about Among Others is something I haven't really seen any reference to yet in any other reader reviews (I haven't read any reviews by professional critics yet) - which is that it's very hard to say whether Mori really is magical at all. As she explains herself, magic makes things happen by causing 'chains of coincidence'. In Mori's magical world, a spell to destroy a factory doesn't make it disappear in a puff of smoke, it simply closes down for reasons of economy, so it's impossible to tell whether things happen by magic or just ... happen. Her hated mother, supposedly a wicked witch bent on something akin to world domination, sometimes seems more akin to an abusive, violent woman, possibly with a mental illness and certainly highly manipulative, and when we learn exactly how the accident occurred that has killed Mori's twin and left Mori disabled by a horrific leg injury as the two were running away, it seems hard to suggest that magic had anything to do with it.

Mori's love of science-fiction and fantasy literature is obsessive, meaning the novel is crammed with references to books and authors of the genre which shape Mori's relationship with her father and almost everyone else who becomes important to her, and it's both a comfort blanket and an escape for a confused, traumatised child. Could it be that the only way she can cope psychologically with her situation - abuse at the hands of her mother, the loss of her identical twin ('the better half of us'), a stint in a children's home (the horrors of which are only ever hinted at), a new and painful disability and life at a mediocre boarding school rife with bullies and a disturbing lack of privacy - is to frame it in a fantasy that somehow makes sense of it? Or is she a genuine 'good witch' whose open-mindedness and unique perspective really does help her to see the fairies and the sense the magic that others can't?

Mori is certain that 'it would be insane' of her to stop believing in fairies. Is this because it's insane to deny what she can plainly see, or is it that she would go insane if she didn't have the fantasy of magic to cling to? Are we to believe her or not when she assures us 'I can tell the difference [between fiction and reality], really I can'?

Personally, I never quite made up my mind, but regardless of what Mori is and why she's different, I loved her from the very first page. Her lack of self-pity, her affectionate fondness for her eccentric extended family, her kindness, her occasional naivete, her incredible resilience, her genuine determination to forge some sort of future for herself after her life has been ripped apart and her unique narrative voice all make Mori one of the most appealing teenage characters since I Capture The Castle's Cassandra Mortmain, so much so that I almost wished I was 15 again and attending Mori's ghastly boarding school so we could be friends.

The detail and frequency of the sci-fi literature references may irritate some readers, and this is not a book to read if you're looking for an eventful plot or fast-moving action; it has neither of those things. It does, however, have a certain beauty about it - a certain magic - that drew me in and kept me utterly captivated to the end.