The Lewis Man by Peter May

Around a year ago I reviewed a crime novel set on the Isle of Lewis: The Blackhouse by Peter May. I had a few fairly strong criticisms of it, but was sufficiently intrigued to download the audiobook of the sequel, The Lewis Man, to which I've just finished listening.

I'm delighted to report that The Lewis Man struck me as a much better book than The Blackhouse, both for its plot and its characters, many of whom featured in The Blackhouse but are more solidly portrayed here. My other gripe about The Blackhouse was that things seemed to progress unnaturally quickly at times, as if May were writing a novelisation of a screenplay, but this isn't the case with The Lewis Man. The pace is just right and relationships are built convincingly. I particularly enjoyed seeing more of the Reverend Donald Murray too, who I never really believed as a character in The Blackhouse but who has considerably more depth here.

Like The Blackhouse, The Lewis Man features Fin Macleod, an ex-islander returning to Lewis, this time after resigning from his job as a policeman in Edinburgh with the intention of renovating his dead parents' all-but-derelict croft house and, perhaps, rebuilding his relationship with his childhood sweetheart Marsaili and his newly-discovered teenage son Fionnach, now a young father himself. The Lewis Man is, however, a murder mystery, and it's not long before the island peat reveals a grisly find: the long-preserved body of a young man with appalling injuries. When it seems that the corpse may be related to Marsaili's family, it's down to Fin to discover the truth for their sake before the police arrive from the mainland. 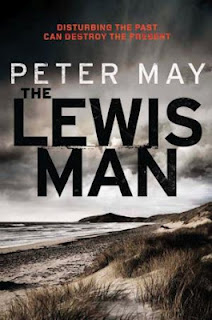 The Lewis Man uses a similar dual narrative technique to The Blackhouse, and is told partly in the third person and partly through the eyes of another character, Tormod McDonald. Tormod is an elderly man struggling with dementia, and Peter May conveys his confusion and frustration extremely well, with genuine and sometimes heartbreaking insight. As some of Tormod's mostly internal recollections are key to the plot, we as readers are often way ahead of Fin in the race towards the mystery's solution, and this can occasionally be a little bit frustrating, but this is a minor gripe: for the most part, I found Tormod's strand of the story gripping and fascinating, not to mention desperately sad.

As a regular visitor to the Western Isles, I know most of the locations in The Lewis Man very well, and May seems to have done a great deal of research to make the islands come vividly to life. It's not a romanticised portrait, but it does capture their unique beauty and isolation while exposing some of the darker aspects of their history too, perhaps mirroring Fin's own love-hate relationship with Lewis.

A small quibble I have with the novel is that while it certainly comes to a nailbiter of a climax, it does finish a little abruptly and I felt it lacked some resolution. However, there is a third novel, The Chessmen, due to complete the trilogy later this year, so it's certainly possible that some loose ends from The Lewis Man will be neatly tied up then.

Since I listened to The Lewis Man as an audiobook, I should add that the audio version is beautifully read by Scottish character actor Peter Forbes, whose voice is not only a pleasure to listen to in its own right but who also makes a fine job of the subtly differing Scottish accents required, including the soft Western Isles lilt with its Gaelic influences. His portrayal of Tormod, in particular, is note-perfect.