Eileen, by American author Ottessa Moshfegh, is the second book I've read from this year's Booker longlist and, like Wyl Menmuir's excellent The Many, it's an unsettling read and an intense experience from very first page. 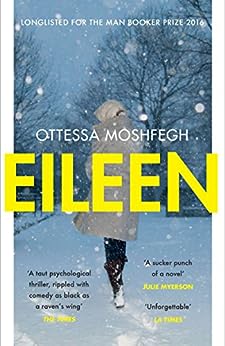 Narrator Eileen Dunlop leads a singularly squalid, miserable and at times bizarre existence in smalltown New England. At 24, she lives with her father, a paranoid alcoholic, who lurches around the house half-dressed and takes his gun with him to the toilet. Eileen herself sleeps on camping cot in the attic, wears her dead mother's clothes and exists almost entirely on peanuts and laxatives. Her relationship with her father is as toxic as the filth that threatens to take over their decaying home, and every day she drives a death-trap of a car to her admin job at a brutally appalling young offenders' institute, where she spends her days making visitors fill in pointless forms full of personal questions of her own devising.  While she dreams of an escape, it seems impossible that she'll ever muster up the courage to leave. Then one day, the fascinating, beautiful Rebecca St John arrives at the prison to oversee an education programme, and Eileen is dragged into a bizarre and shocking crime.

It's impossible not to feel sorry for Eileen, yet it's also impossible to like her. As if her own suffering has exhausted any ability she might have had to feel fondness for others, Eileen hates virtually everyone with an almost aggressive disdain, yet is also convinced she is inferior to them. In fact, the person she hates most of all is herself, and her self-destructiveness is utterly infuriating. She's painfully timid and fears being shamed, yet is a brazen shoplifter. She is terrified of sex, yet constantly dwells on the topic in viscerally unpleasant ways. She is terrified that people will think she smells, yet makes a point of washing as little as possible. At times we could be forgiven for thinking Eileen is a sociopath, but then she'll drop in a detail about her childhood, such her longing for affection from her late mother, her fervent hope that she might get a gift for Christmas instead of a crumpled dollar bill, or the little dog she once loved, and we can guess instead that she's simply irreparably damaged. As a result, Eileen is possibly one of the most relentlessly depressing books I've ever read ... and yet it is at times also funny, albeit in the darkest possible way.

There are shades of Notes On A Scandal about Eileen, and perhaps echoes of Shirley Jackson and Patricia Highsmith, but it's important to point out that, for the vast majority of the plot, almost nothing happens. It's a 260-page novel and Rebecca, the catalyst for what little action there is, doesn't even appear until almost halfway through the book and it then takes some time further for the consequences of her arrival to kick in. For the most part, this novel is Eileen's neurotically detailed account of the days that build up to the main event of the book. Eileen really doesn't spare us anything of the grubby, self-loathing realities of her existence, so it can be tough spending quite so much time with her, despite the brilliance of Moshfegh's prose and the cleverly manipulative way she builds Eileen's truly astonishing and unforgettable character and drags us reluctantly into her grim world. It's the sort of book that makes you want to have a shower after reading it, such is its overwhelming seediness.

And yet, despite her stubborn refusal to get to the point as she tells her minutely detailed story, and the constant discomfiture deliberately causes through her painfully confessional narration, there was actually no point at which I wasn't rooting for Eileen. The 24-year-old version of Eileen might be a someone you'd actively cross the street to avoid, yet the much older Eileen who narrates the story with the benefit of hindsight is clearly far more at peace with herself (albeit having got to that point through a series of weirdly dysfunctional choices). It's this that gives the book its only hint of hope, and it's a better novel because of it.

I will remember this book for a very long time, and it truly is brilliantly written. I'd certainly recommend it if you can stomach it.