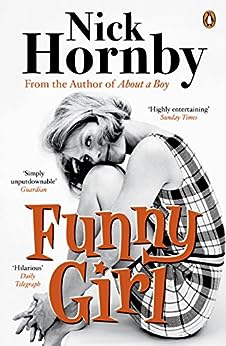 Nick Hornby’s Funny Girl is a warm, witty novel set in the 1960s. It begins with Barbara Parker deciding – minutes after being crowned – that she can’t stand to be Miss Blackpool for a moment longer and leaving Lancashire to pursue her dream of becoming a British Lucille Ball. Barbara Parker is soon reinvented as Sophie Straw, and what follows is a bittersweet journey through Sophie’s adventures in Swinging London as she carves herself a niche in comedy.

My enjoyment of this book was fuelled in part from my interest in the entertainment industry during this era, when writers like Johnny Speight and Ray Galton and Alan Simpson were producing groundbreaking sitcoms, satire was booming and the arts in general were undergoing something of a revolution. Nick Hornby refers to numerous real television insiders throughout the book and writes very well on the process of writing and producing a BBC series during this time, and it’s hard not to share in Sophie’s sheer delight at spending time in a room with a group of such clever, creative people, for all their flaws and idiosyncrasies. The camaraderie of the team behind sitcom Barbara (and Jim) is beautifully portrayed, complete with bickering, clashing egos and occasional disruptions by bit-parters, cuckoos in the nest of the Barbara (and Jim) family.

Hornby doesn’t make the mistake of glossing over the negatives of Sophie’s new-found fame, however – the appalling sexism of the industry and of the period, the short shelf-life of shows and careers when audiences are constantly looking for something new, male expectations and the increasing lack of common ground between Sophie and her family back in Blackpool are all important factors in the story. Barbara (and Jim) might bring Sophie and her colleagues fame and kudos, but for the most part, their lives are unglamorous. They might be invited to industry parties, asked to sign autographs and commissioned to write for Anthony Newley, but their relationships are complicated and their success precarious at time when audiences are constantly looking for something new.

Sophie herself is a well-written and believable character. She's witty, bold, sometimes naive and sometimes tough, sometimes insecure and sometimes confident to the point of arrogance, and perfectly capable of being ruthless when necessary. She knows that men find her sexy, but her aim is never to be a 'dolly bird' - it's to make people laugh. Not all her choices are wise ones, but it's impossible not to like her. Writing team Tony and Bill and producer Dennis are also fascinating characters in their own right, and the dialogue between the three of them and with Sophie and her co-star Clive practically sparkles on the page.

There's no intricate plot to Funny Girl, and no real twists or surprises, but it still kept me turning the pages just as quickly as the most gripping thriller. It's charming and funny, it's packed with perfectly chosen period detail and it's a fascinating social history of a decade full of change.