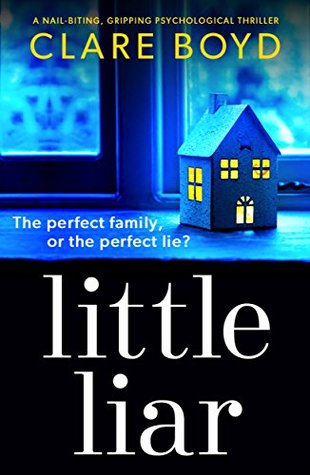 I bought Little Liar for my Kindle when it was on special offer and then because I had an Audible credit I added voice narration free and alternated between reading and listening to the audiobook. I'd say it fits into the currently very popular 'domestic noir' category, but unfortunately I think it's a pretty poor example of it.

It's about a very well-off middle class family who find themselves torn apart by allegations that the mother is abusing their ten-year-old daughter Rosie. The investigation is initially triggered by a call made by their somewhat interfering, childless neighbour Mira - but when the police interview Rosie, things take an unexpected turn. Who, exactly, is the one who's lying?

The story is told partly in the first person by Gemma, the mother, and partly in the third person from the point of view of Mira, who appears to have some sort of post-traumatic stress disorder as a result of her own difficult childhood - there are lengthy flashbacks that deal with this. I found Gemma's sections of the narrative tiresomely repetitive. She's somewhat controlling and neurotic, completely incapable of choosing her battles with Rosie, and I lost count of the number of times she and Rosie fell out over some minuscule thing that resulted in Rosie having a screaming, babyish tantrum. Given that Gemma and Peter are wealthy, educated and send their children to a private school despite there being a pleasant local primary nearby, it seems inexplicable to me that they would tolerate their ten-year-old having hysterical, physically violent fits of prolonged rage like a toddler every single time she doesn't get her own way without seeking some sort of professional help for her. Everyone in the family is spoilt and whiny, including both parents. The more I discovered about their circumstances, the more I could see changes they could easily to make to their lives that would go a long way to solving their problems, and yet these obvious possibilities are never even mentioned.

Mira is also not exactly a character I enjoyed spending time with. She's a cliché from start to finish - a dowdy, awkward type with a hint of sinister tweeness who could be slotted into any number of similar stories. I'm not convinced most ten-year-olds would want to strike up a friendship with an overly-intense woman who insists on calling her Rosie Rabbit, and I didn't feel for a moment that her relationship with Rosie rang true. Mira's back story is a sad one, but I felt her reaction to it does women who have gone through this sort of experience quite a disservice.

There are also extracts from Rosie's diary, which I found painfully unconvincing. They don't read like anything written by a ten-year-old and feel contrived and jarring. I also don't for one moment believe  this diary, with which Rosie is openly obsessed, would have gone unread for as long as it does by Gemma or her husband Peter, under the circumstances. The author can't seem to decide whether Rosie, at ten, should behave like a small child or a teenager - it's possible this was a deliberate attempt to show that Rosie is at that difficult 'tween' age, but it doesn't ring true, and neither does the development of her character in the final pages of the novel. I found it quite hard to have much sympathy for either Gemma or Rosie, and the story does rather rely on the reader rooting for at least one of them.

There is a secret at the heart of this story which felt to me like a pretty dull revelation, not least because it was a secret that need never really have been kept in the first place. I kept waiting for a twist that never came, but instead, the story just drags on in tedious and unnecessary detail. If I hadn't been listening to the audiobook while I was decorating our spare room, I doubt I'd have bothered to finish it.

One last thing: the Kindle edition of Little Liar has countless mistakes in it. Names are spelled inconsistently; at one point a sentence switched from first to third person halfway through, a mat is a 'matt' ... I could go on, and these were just the ones I noticed in the sections I read rather than listened to. I've no idea whether these mistakes appear in the print edition too, but I suspect this book was rushed out by the publisher before the domestic noir bubble bursts.
Email Post
Labels: child abuse clare boyd domestic noir family drama little liar middle class psychological thriller ptsd stalker