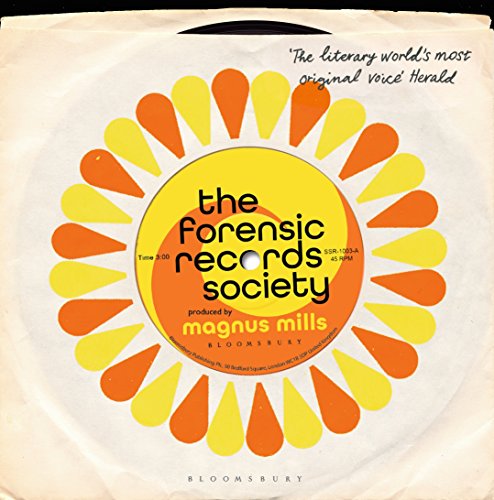 Like a lot of Magnus Mills' books, The Forensic Records Society is an understated satire about a group of men and the seemingly trivial rules and obligations through which they interact, and what happens when someone breaks them.

The book begins with the formation of the Forensic Records Society of the title. A small group of men meet once a week at 9pm in the back room of a pub to listen to records. The rules of their society are strict: no latecomers are admitted, each member has to bring three 7" vinyl singles to play, and most importantly, the records must be listened to in silence and absolutely not discussed or analysed in any way. Soon, a rival society - the Confessional Records Society - springs up, at which members play their record of choice and then make a confession related to it. And then a third record society appears...

This a book in which what isn't said is just as important, often more so, than what is. None of the men of the record societies ever really talk to each other about anything except records. There's only one important female character, Alice, who is every bit as awkward as the men are, and who is hostile towards the book's narrator because she has decided, completely without justification, that he doesn't really like music because some of the records he brings to the society have 'gimmicky bits' in them. One character is obsessed with how long records are, believing the perfect pop song to last for three minutes, and is incapable of discussing this in any but the most black-and-white terms. Another character can only talk about music by quoting a single lyric - which causes problems when members can't decide whether this contravenes the Forensic Records Society's constitution.

Like all Mills's books, The Forensic Records Society is very funny at times, yet also sometimes unnerving in a way that's strangely hard to pinpoint. Mills has a clear, matter-of-fact, calm prose style which somehow makes the occasional inexplicable oddities - why, for instance, does time seem to play odd tricks while the Forensic Records Society meets? - seem all the more off-kilter. It's something Mills really excels at (most notably, I think, in his earlier novels All Quiet On The Orient Express and The Restraint of Beasts) and it's very much evident here.

Apart from being a gently ironic look at that peculiarly British, quietly obsessive way that some people treat their hobbies, there are obvious parallels in politics and religion, and it's pretty clear that Mills is telling a story much bigger than that of a group of men who meet every week in the back room of a pub. There are parts of The Forensic Records Society that remind me of Animal Farm, but needless to say it's considerably funnier and at times almost painfully relatable.