A Demon In My View by Ruth Rendell 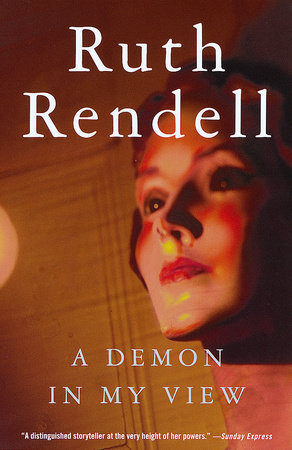 Last year I re-read Heartstones, a Ruth Rendell book I really loved when I was about 13, and this is another book by Rendell that I first read at around that same time. My mum borrowed it from the library and gave it to me to read after her, although I'm sure many parents today would consider it highly unsuitable reading for a young teen.

A Demon In My View opens with a woman being strangled to death - only it isn't a woman. It's a hollow plastic shop mannequin that Arthur Johnson, a prim loner of 50, keeps in the cellar of the converted house in which his flat is located. 'Killing' his mannequin in the darkness is his only release, and, along with avoiding going out at night, it helps him to control his impulse to kill real women. Not that Arthur, a sadistic psychopath, feels guilty about the idea of killing women - he's simply terrified that he'll be caught. So when something happens to stop Arthur from acting out his fantasies, it's only a matter of time before the uneasy equilibrium he'd previously managed to maintain becomes disrupted.

Meanwhile, another A. Johnson - this one a PhD student called Anthony - has rented a room in the same building while he tries to make sense of his affair with a married woman who is trapped in an abusive relationship. One day, Arthur accidentally opens one of Anthony's letters, which sets in a motion a chain of events that has terrible consequences for both of them.

Although Ruth Rendell was well-known for her detective stories, this book isn't a mystery - we know who and what Arthur is, and what he's done, right from the start. Instead, this is partly a study of the mind and habits of a psychopath, and partly a tense study of the impacts we inadvertently have on the lives of others. It's also a fascinating portrait of Bedsit Land, set in a house in a rundown London borough with a changing demographic, where properties are converted into multiple tiny flats of one or two rooms and residents come and go in uncomfortably close proximity to one another. I lived for several years in tiny rooms contained in a property exactly like it, and a lot of the details - trips to the laundrette, residents who come and go at odd hours, confusion over post and bin collections - did ring very true. The only difference is that the residents in A Demon In My View actually talk to each other - although not enough, clearly, because despite researching psychopathy for his PhD, Anthony doesn't realise that his buttoned-up middle-aged neighbour is a killer hiding in plain sight.

There's also plenty of social commentary, some of it relevant today and some of it, let's say, more of its time: this book was written in the 70s, and it shows in some of the depictions of non-white characters. Arthur himself is a vile racist who is horrified when a charming, erudite black man moves into one of his landlord's flats, and this is perhaps what we'd expect from him, but even the supposedly positive depictions of black characters are stereotypical - I felt pretty uncomfortable about the somewhat fetishistic descriptions of Anthony's Jamaican friend Linthea, for example, and the Taiwanese Li-Li doesn't always fare terribly well either (although, with her outrageous nerve and string of boyfriends, she's one of my favourite characters in the book).

The book is also, to an extent, an exploration of misogyny. Arthur's overt dislike of women and desire to hurt them clearly stems from his childhood, which he spent with a controlling, suffocatingly over-attentive aunt who he simultaneously worshipped and feared. Also unnerving, though, is how rapidly Anthony falls subconsciously into misogynistic thought patterns when Helen, the woman with whom he's been having a clandestine affair, seems close to rejecting him.

A Demon In My View is a fairly quick read and yes, in some ways it's dated (partly because the plot hinges around a pay phone and letters being Anthony's only means of contacting Helen, but also because many readers today would look for more complexity in a fictional psychopath than we get from Arthur, who is something of a cliché and bears more than a passing resemblance to Norman Bates).* But Ruth Rendell really did excel at this sort of story, exploring the dark psychological motivations behind chillingly unpleasant, awkward characters, and I enjoyed revisiting this book as an adult.