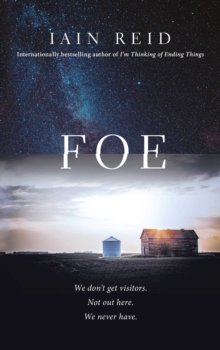 Foe, the second novel by Canadian author Iain Reid, begins with a car pulling up at an remote rural farmhouse. Junior and his wife Hen don't get many visitors, and the arrival of Terrance feels slightly ominous.
Even more ominous, then, is the purpose of Terrance's visit. He's come to tell them that Junior has been shortlisted for a government programme, run by a company called OuterMore, that will see him sent away to spend a couple of years in space, during which Hen will be left alone in the farm house. What's even more strange, though, is how OuterMore propose to compensate Hen for Junior's absence.
Let's not beat about the bush: like Reid's previous novel, I'm Thinking Of Ending Things, Foe is a novel about denial, isolation, fractured relationships and existential dread. It's set some time in the nearish future during a hot, flat, featureless summer, and despite the setting's vast, empty agricultural landscape of endless rapeseed fields, there's a strong sense of claustrophobia. Junior and Hen don't socialise or go out for any other reason than work (there is a reference to grocery shopping, but we never actually see it happen) and even that work is dull and dystopian, with Junior filling and moving grain bags all day at a vast feed mill. They rarely speak to anyone but each other. For reasons left ominously unclear, there is a ban on keeping livestock, so the couple don't even have any pets except some chickens that Junior keeps concealed in a barn.
Junior, however, is seemingly content with this arrangement, and when Terrance arrives the couple seem to be doing perfectly well in their seclusion. If anything, the thing that's most unsettling at this point in the novel is the strange passivity with which Junior, in particular, accepts Terrance's presence in their home and the news that he brings. There is something unnerving and off-kilter about people who react with calm acceptance to shocking news and never challenge what are clearly major impositions. Instead, for the most part Junior and Hen quietly get on with things, despite the undercurrent of unease and resentment which starts to permeate their lives and the questions raised about their relationship.
This is one of those books that can't be discussed in too much detail without spoiling the plot, but it's enough to say that Foe is a chilling read, a slow-burning anxiety dream in which every word and every moment has a significance. It's a short but intense book, perfectly crafted in every detail, and an uncomfortably thought-provoking novel whose ending - or, perhaps, endings - can't fail to unsettle the reader.