All Among The Barley by Melissa Harrison 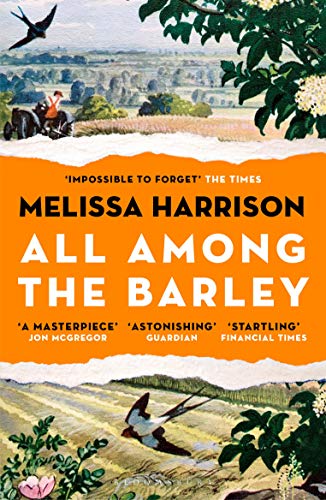 Somehow, completely by accident, I managed to read two books in a row featuring troubled teenage girl protagonists living in superstitious early 20th century farming communities in rural Suffolk. What are the chances, eh? The first was Michelle Paver's Wakenhyrst, and after that I went straight on to Melissa Harrison's All Among The Barley.

Set in 1935, All Among The Barley centres on Edith Mather, the youngest child in a farming family. There's no electricity and no running water, and although the family does have a small tractor, it's rarely used - their land is much better suited to their team of much-loved plough horses, Moses and Malachi. At 14, Edie has just left school. She helps her mother with wash day, feeds the hens and carries out farm chores, but she's also prone to daydreaming, giving rise to the suspicion that she's 'touched'. Whether Edie is indeed 'touched' is debatable: academically, she's extremely clever, but socially, she struggles, and she's a great one for forgetting her chores and wandering off.

Just as Edie's education is coming to an end, Constance FitzAllen arrives at Elmbourne, singing the praises of rural traditions and keen to write a series of magazine columns about farming and farming families. Edie is captivated by the sophisticated Constance, with her hearty upper-class frankness and her men's trousers, and Constance soon starts to win over others in the village too. At first, Constance's biggest fault seems to be her tendency to romanticise - and patronise - the local people and their way of life. Then one day, she casually begins a sentence with 'I'm no anti-semite, but...' and suddenly we realise that Constance's visit to Elmbourne has a more sinister purpose. In the meantime, the Mathers' crops are failing and Edie's father is becoming more difficult  by the day, and Edie is being pursued by a friend of her brother's, whose physical attentions she fears but endures.

All Among The Barley is beautifully written and incredibly evocative, full of stunning descriptions of book's locale and its plants and animals, and I loved many of the characters. However, I also found it painfully sad - Edie's vulnerability, and everything that happens to her a result, made me want to reach into the book and rescue her. It's not that her family aren't looking out for her, but simply that they're emotionally ill-equipped to deal with the traumas of either the present or the past. Their community is too small and close-knit, their situation too precarious, the Great War still casting too long a shadow. Resentments are unspoken, problems unshared, scandals swept under the carpet.

There are also some clear parallels in All Among The Barley to the political situation of the present day, to the extent where I found parts of the book quite chilling. I won't reveal more because I'd rather not spoil the plot, but it adds an extra dimension to the novel which made it feel sharply relevant. We're not quite halfway through the year yet, but I'm going to jump the gun and say that All Among The Barley is already one of favourite reads of 2019.
Email Post
Labels: 1930s all among the barley book review countryside farming fascism feminism folklore melissa harrison mental illness rural superstition