Extraordinary Birds by Sandy Stark-McGinnis is narrated by December, a troubled 11-year-old who loves birds so much that she's convinced she will one day turn into one. Abandoned by her mother some years ago, December has only one thing to remember her by, The Complete Guide To Birds Volume One. And December is writing a book of her own, too: a diary-cum-memoir of her quest to spread the wings she believes will unfurl from a scar on her back and fly. 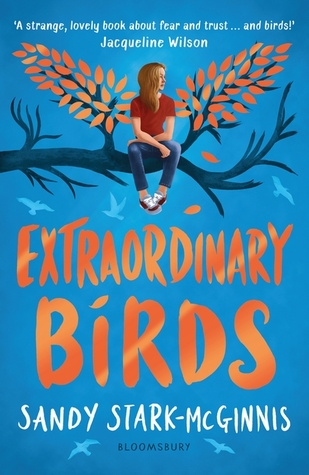 After being moved from one of her many foster placements after jumping from a tree, December is taken to live with Eleanor. Taxidermist Eleanor, like December, loves birds, but December is wary of her motives. This book is the tale of how December and Eleanor gradually get to know and trust each other, and how December slowly begins to recover from her deeply traumatic past.

This book is, I'd guess, aimed at the 9 - 12 age group, so while it's obvious that something awful has happened to December, it's largely left to the imagination and this simple story is a touching book rather than a harrowing one.

As an adult reader I could guess right from the start exactly what was going to happen, so there were no surprises there, and to be honest I think readers from the intended age group would probably be able to work it out too. However, it's a beautifully written story and December, whose admittedly challenging behaviours are so utterly without malice, is a hugely sympathetic protagonist. It's a pleasure to see her make friends at her new school with her classmate Cheryllynn, who's had worries of her own to contend with and understands how important identity, belonging and being comfortable in your own skin can be.

This wasn't a book I'd generally have picked up, but I was also a child who was obsessed with birds - albeit a child with a much happier background than December's, thank God - so I was intrigued by the set-up. While it didn't have quite the crossover appeal I'd hoped for as an adult, Extraordinary Birds is a sensitively written, charming book and certainly one I'd recommend for younger readers.
Email Post
Labels: adoption america birds book review child abuse children children's books extraordinary birds foster child parents sandy stark-mcginnis trauma