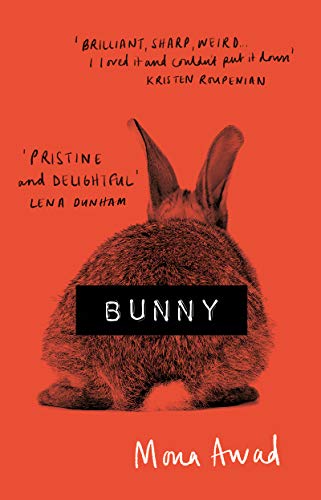 Bunny by Canadian author Mona Awad probably takes the prize for being one of the oddest books I've read this year.

Samantha Heather Mackey is a creative writing scholarship student attending a graduate degree course at New England's exclusive Warren University. She's out of place on her course - most of the other students are wealthy, and she finds the other women in her tutorial group unbearable. The 'Bunnies', as they call one another, are cloyingly twee, obsessed with hugging and seem to exist on miniature cupcakes. They live in beautiful, tastefully decorated homes that's a world away from Samantha's rundown bedsit, dress in perfect print dresses and fawn over each other's pretentious fiction while pouting disapprovingly at Samantha's darker, edgier work. Desperately lonely and excluded from the Bunnies' clique, Samantha focuses her energies on Ava, her mysterious, cynical Goth best friend instead. But one day she receives a surprising invitation to one of the Bunnies' gatherings, and she's sufficiently intrigued to go along. They want her to take part in a creative project, it seems. It's 'experimental' and 'perfomance-based', and explores 'the Body'.

What happens next is startling to say the least, as Samantha becomes drawn into - well, what? A coven? A nightmare? A Frankensteinian creation experiment? A hallucinogenic cross between Heathers and The Secret History with a dash of Weird Science? I won't reveal more as I don't want to give too many spoilers, but it's enough to know at least one head explodes, that rabbits seem to feature heavily and there are suddenly a lot of young men drifting about town who don't seem to know what they're doing  there and whose misshapen hands are mysteriously covered by gloves. Meanwhile, Samantha's identity is gradually becoming more and more confused. Is she a Bunny too, now?

Bunny is a confusing, dreamlike experience. We have no idea what's real and what isn't, and frankly, neither does Samantha. It's unsettling and off-kilter from the outset: even before things get really weird, there are odd, passing references. For example, in the context of student safety Samantha casually refers to a recent spate of decapitations. Nothing in Bunny is ever particularly clear - even characters' names shift and change throughout the story. Samantha both loathes and fears the Bunnies, but is also flattered by their attention and approval.

It's also, however, a sharply accurate send-up of post-graduate fiction writing courses, with every student desperate to push creative boundaries and explore avant-garde forms - plot is simply something that gets in the way. One Bunny writes nothing but vignettes. Another etches prose-poems - or 'proems' - on to glass, which the other Bunnies insist is every bit as valuable as her sister's life-saving work as a surgeon. I'm glad those elements were there, and that Samantha's commentary at least observant when her state of mind allows it, because the feverishly hallucinogenic nature of much of the rest of the book can feel relentless, exhausting and even repetitive - I'd have liked a little more variation in tone, particularly in the final third of the book.

Is Bunny a horror story? A dark fairy tale? Is it a satire on a writer's creative process? Literary fiction? It's probably a little of all these things, but it's also an exploration of profound loneliness, something that becomes increasingly obvious towards the novel's end. I do think it's a book that asks for slightly more effort from the reader than it fully deserves, but it's a highly original read.
Email Post
Labels: academia book review bunny creative writing horror literary fiction loneliness mona awad satire surreal university