Dracula The Undead by Freda Warrington 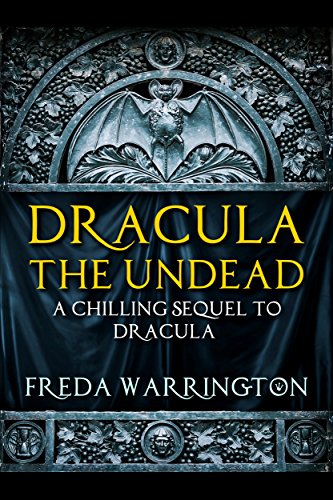 Full disclosure: I've been obsessed with Dracula since I was a child and spent years reading and watching everything I could about the book, the films, the character, the associated folklore and anything else I could find. When I went to university, my degree dissertation was on portrayals of Dracula, my central point being that the character has long since transcended his origins in Bram Stoker's novel. At the start of this year I watched (and loved) the BBC's three-part series written by Mark Gatiss and Stephen Moffat and starring Claes Bang as the Count, which rekindled the smouldering embers of my Dracula interest. Once the series had finished I wanted to start exploring the character again in light of this new version, and started reading Freda Warrington's Dracula sequel Dracula The Undead, commissioned by Penguin and first published in 1997 to mark the centenary of Bram Stoker's original novel.

I'll be honest, I was fully expecting not to like it much, but I actually found most of it a lot of fun. Set seven years after Dracula's demise at the hands of Van Helsing, Harker et al, it begins with the group making a return journey to Transylvania to achieve some sort of closure on their traumatic experience and to reassure themselves that no trace of Dracula remains. There they spend time with a friend of Van Helsing's, Andre Kovacs, who shares his academic interest in vampires. Satisfied that Dracula's evil truly has been vanquished, they return home, and Jonathan and Mina Harker take on Andre's niece Elena as a nanny to their frail son Quincey. Meanwhile, Andre decides to search for the Scholomance - known in legend as the school in which the Devil teaches ten scholars and grants them special powers while taking one of ten for himself - which Dracula is rumoured to have attended.

It's obviously not a spoiler to reveal that, needless say, Dracula is not as dead as Van Helsing and his friends believed him to be - his body might be ashes, but his spirit still survives. All that's required to bring him back is for someone to resurrect him, and the Count, even when deprived of a corporeal form, is a very persuasive man. And once he's back, he wants his revenge.

The book is written in a fair imitation of Bram Stoker's Victorian Gothic style, and like the original novel it comprises journal entries and letters by the different characters. For the most part, it feels in keeping with Stoker and works well as a sequel, although from a horror fan's point of view it lacks the impact of Stoker's creepiest scenes. What we do see more of in Dracula The Undead is Dracula himself. In Dracula, the Count doesn't actually appear very often after the opening chapters set in his castle, and when he does he doesn't have much to say for himself, but this time he converses with the other characters quite a lot - this is certainly a plus, as anyone who has read Dracula will be fully aware that Dracula is by far the most interesting and charismatic presence in the novel while most of the other characters are so insipid as to be almost interchangeable.

In Dracula The Undead, we learn a more about the Count's background and motives, and his cunning and manipulative duplicity are at the forefront. I do have a quibble with one element of his storyline here, which is that I don't think his motive for pursuing Mina Harker, or the influence that this has on the end of the story, is at all true to Dracula as a character. I find an eloquent and urbane but utterly selfish and amoral Dracula more interesting (and frightening) than a melancholic Gothic-romantic one, and I believe that nobility describes only his bloodline and absolutely not his personality. The Dracula we see here doesn't quite fit that bill in the latter chapters and consequently I didn't feel satisfied with the end of his story. This is a pity, because in most other respects Warrington has done a good job with the Count.

The plot elements involving the Scholomance are interesting, but in many ways feel as if they belong in a different book altogether: they work perfectly well in isolation but don't always gel particularly well with the rest of the novel. However, of the multitude of Dracula prequels, sequels and alternative versions that are out there, I'd say this is certainly among the better ones, and I'm glad I read it.
Email Post
Labels: book review bram stoker dracula dracula the undead freda warrington horror sequel vampires