The Unlikely Escape of Uriah Heep by HG Parry 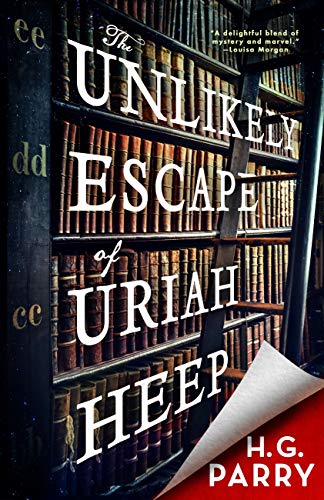 Sometimes when I review a book, I find myself saying that I expected to love it but was disappointed - in this case, it was the other way round. I was intrigued by the premise, which is that literary characters can escape from their books and materialise in the real world, but almost certain that it wouldn't work in a way that I'd enjoy. I had previously tried reading Jasper Fforde's Thursday Next series, which has a somewhat similar set-up, and found them to be far too self-consciously whimsical and insufferably arch and smug, and I feared HG Parry's The Unlikely Escape of Uriah Heep might be similar in tone. I was completely wrong, thankfully. It's an action-packed, witty, smart urban fantasy with the difficult relationship between two brothers as its emotional heart.

Rob Sutherland is a New Zealand lawyer practising in the city of Wellington. Pragmatic and capable, he deals very much in facts and certainties. His younger brother Charley, however, is a professor of literature and a former child prodigy who read English at Oxford aged 13. Charley's connection with the books he reads is so intense, so focused and so full of understanding that he can make the characters  quite literally come to life. Ever since The Cat In The Hat materialised in the family home when Charley was a toddler, it's been clear that he is a 'summoner' of fictional characters, and the Sutherlands have been trying to conceal this ever since.

Charley can usually suppress his ability when he wants to, but sometimes he slips up, and the book begins with him calling Rob in the middle of the night to ask for help in catching Uriah Heep, the obsequious, vindictive clerk created by Dickens, whom he has accidentally summoned while working late at his university. It then transpires that there are a lot more fictional characters on the loose in Wellington - and more worryingly, they haven't been summoned by Charley. So where are they coming from, and why are some of them intent on destroying him?

HG Parry has a huge amount of fun considering how literary characters might be if you met them in real life, and about how readers' personal interpretations might have a bearing on how they look and behave. For example, there are several Mr Darcys in this novel, broadly similar but also clearly influenced by different film and TV versions their readers have seen. The Hound of the Baskervilles appears as both the monstrous hell-hound of its early chapters and as the starving domestic dog Holmes later reveals him to be. Dorian Gray in this book happens to be a computer whizz, because he was 'read out' by someone who drew parallels between his character and today's predatory online catfishers.

It probably helps if you are very broadly familiar with some key literary characters before you read this book, and with the general concept of literary criticism and analysis, but you don't need to have read the actual books involved and you certainly don't need to have studied English since school to enjoy this book and get most of the references. More than anything else, it's a love-letter to reading for pleasure, and if you're someone for whom characters almost do seem to come to life in your head when you're engrossed in your favourite book, you'll appreciate the literal interpretation of this in The Unlikely Escape of Uriah Heep. Is there anyone who has read a Sherlock Holmes story who wouldn't jump at the chance to have a conversation with the man himself? Could anyone, even against their better judgement, resist the opportunity to sit down and interview Victor Frankenstein? Certainly not me, and I've rarely empathised with anyone as much as Charley when he can't quite repress his urge to bring his favourite characters to life.

There is one escaped book character in this story who doesn't appear in a real book and has been invented by the author herself: Millie Radcliffe-Dix is a hearty, intrepid English girl detective from a fictional early-20th century series, which I think we can assume is meant to be a sort of cross between the Nancy Drew books and The Famous Five. As all the other book characters are from real books, I did find this slightly jarring at first (so much so that I Googled Millie to check that she wasn't a genuine children's book character I'd never heard of, which would have put me more at ease). However, the adult Millie is such an endearing and spirited character that I soon came to accept and enjoy her presence in the novel, and it would probably have been difficult to have her role in the plot played by a already-familiar character from novels we've actually read.

The plot is somewhat complicated, involving various layers of intrigue and some major twists, and combines detective work with high adventure. There are times when I'm not convinced it makes complete sense, and I think the book overall is perhaps about 75 pages too long, but it's such an entertaining rollercoaster ride that I didn't really mind. The complexities of Rob's and Charley's relationship, and in particular the mixture of protectiveness and resentment that Rob feels towards his younger and infinitely more gifted little brother, are woven convincingly and touchingly into the story. I liked both of them a great deal, even when Charley was the one I better understood. If you're looking for a lively, witty, escapist urban fantasy, The Unlikely Escape of Uriah Heep should definitely be on your list.