A Weekend in New York by Benjamin Markovits 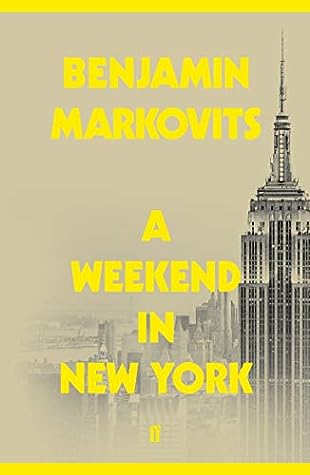 A Weekend In New York spans, as the title suggests, a single weekend in the lives of the wealthy  family. Paul Essinger, a mid-ranking professional tennis player nearing the end of his career, and living in Manhattan with his partner Dana and their perpetually fractious toddler, Cal. As the Essinger family tradition dictates, his parents and siblings have descended on New York to watch him play in the US Open, and as the weekend unfolds, various low-key family tensions start to surface.

The person I feel the most sympathy for is, undoubtedly, Dana, who is relatively non-confrontational and a little unsure of her place.The Essingers are a large family and an argumentative one, and if I were Dana I would feel overwhelmed by them too. The first time she met them as a group, she says, she went into the bathroom and cried, and I honestly don't blame her.

The Essingers as a group grated on me throughout the book. I have a low tokey features of the Essinger family dynamic. The parents, Bill and Liesel (their adult children call them by their first names) are certainly well-meaning but never seem to listen properly either to their children or to one another - Bill, in particular, seems to think that confidently ignoring people's views is the best way to deal with them; he's one of those people who is utterly convinced that he knows better than others what's best for them. Nathan, the elder son, is unbearably full of himself and seems desperate to assert his intellectual superiority at the expense of anyone else's feelings (a scene where he insists on performing a complicated series of calculations to work out Paul's minuscule odds of winning the Open, despite knowing full well that it's upsetting other people, made me want to punch him). Jean, the youngest, has an attitude more like that of a difficult teenager than what she is, which is a successful, London-based TV production manager. Susie, a grown woman and already a mother to a precocious son, is inexplicably nervous about telling her family she's pregnant again for fear that they will accuse her of abandoning her career. Paul himself - the reason the whole family are assembled in the first place - is curiously bland, although we can perhaps attribute some of this to his pre-tournament self-absorption. We do get some insight in the peculiarities of life as a professional sportsman, particularly one who competes solo rather than in a team - I'd like to have seen more of this.

The character I found the most interesting was Liesel, who grew up in Nazi Germany and whom was never forgiven by Bill's Jewish parents for marrying their son. She's recently published a memoir of her Third Reich childhood, and is increasingly concerned with memory and storytelling. She gave up her culture to live in the States, she says, and I got the impression that her desire to retire to the cosmopolitan bustle of New York from the expansive emptiness of Texas was partly fuelled by her immigrant experience and her memories of Berlin.

The actual events of the novel are deliberately mundane. The family gather for  meals, Bill and Liesel view some apartments despite Bill having zero intention of granting Liesel's wish to move, Paul goes to his tennis club to practise, Bill visits his housebound sister in Yonkers. Nathan has a business meeting. Not that this matters, as this is very much a novel about character and the family dynamic, and how they fit into the wealthy, liberal sector of American society as a whole: there's no real plot and there isn't meant to be and in any case, the Essingers manage to make everything unfeasibly complicated. They are talkers, we're told, not touchers, and nothing happens without debate, including the choosing of restaurants or whether to take a taxi there. There is not a moment during their weekend where nobody is fretting about something incredibly minor, nobody is arguing over a tiny triviality and nobody is talking over someone else. A dozen conversations happen at once, a consensus is never reached on anything and everyone over-analyses to the nth degree. By the end, I just felt slightly stressed by it all.

The characterisation in A Weekend In New York is excellent, as are the descriptions of New York as a city, and the depictions of the family tensions. Markovits is excellent at getting into his characters' heads and has a fantastic ear for dialogue. There are some vignettes in this book which are extremely perceptive, some which are touching and many that are almost wistful. But the Great American Novel vibe was quite self-conscious in this book, and it does feel as if it's trying to signpost its own literary credentials at every turn, which means it's occasionally dangerously close to parodying what it aspires to be.