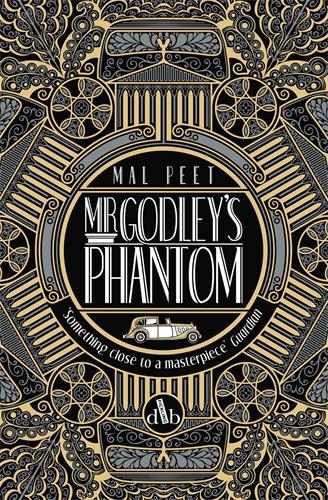 Mr Godley's Phantom was published after the death of the author, Mal Peet, who is best known for his excellent, thoughtful YA fiction, most notably Keeper. This book, though, is for adults and although it was marketed as a ghost story in the bookshop I bought my copy from, I'm not sure it really quite fits that label.

Martin, the protagonist, has had his youth interrupted by World War II, where among other traumas he was the first NCO to enter the gates of Belsen on the day of its liberation. Shattered by his experiences, he finds himself unable to settle back into civilian life or complete the degree he had begun before he was conscripted. He's stricken by terrifying flashbacks and every visit to a new location is fraught with constant anxiety as he finds himself mentally imagining the routes by which he might order his troops to storm it. When he's offered a job as a sort of general handyman and chauffeur to Harold Godley, an elderly man living alone but for a couple of servants in an isolated Dartmoor mansion, he takes up the opportunity with the notion that the peace and quiet and the fresh air will do him good.

When he arrives, however, he finds that the job is not what he had hoped for. Godley, painfully emaciated and frail, reminds him of the skeletal inmates he saw dying in Belsen. The house seems moribund and full of unhappy memories, and there's little to occupy his time. Except, that is, for Godley's beautiful, immaculate Rolls-Royce Phantom, with which he instantly falls in love.

It's testament to Peet's skill that I also found myself captivated by his descriptions of the Rolls, as I have absolutely zero interest in cars of any kind. But somehow Peet does manage to capture the allure of the Phantom to Martin, and what it symbolises to him as a means of escape from his own mental prison.

Mr Godley's Phantom does, to be sure, have elements of a ghost story, but it's also a psychological thriller with some aspects of detective fiction too. Martin is haunted in more ways than one and his point of view is not a reliable one. This is a short book but it packs in a lot of atmosphere, and Peet is adept at telling us more by leaving things out than by including them. There's a strong sense that none of the characters are quite what they seem and you may well finish this book feeling that few of your questions about them have been answered.