Before and After by Andrew Shanahan 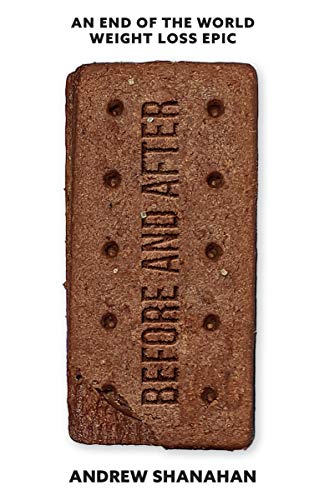 Before I review Before and After, Andrew Shanahan's highly original twist on the post-zombie apocalypse survival genre, I will start by saying that if you are uncomfortable with discussions about eating disorders, weight and diet, or if you are upset by fatphobia or fat-shaming, this book and this review might stir up some uncomfortable things for you and are probably best avoided.

The protagonist is Ben Stone, a young man so agoraphobic that he only really sees the outside world from the balcony of his high-rise Housing Association flat, works entirely from home selling package trips to Disney resorts, and sends his dog for walks by drone. He is also a compulsive binge-eater and has reached a weight at which his mobility and health are severely affected - we're talking about the kind of life-threatening, disabling size that sees people featured on sensationalist documentaries and unable to lead a fully functional and independent life.

At the beginning of the story, a terrified Ben is waiting to be transferred to hospital, which because of his weight requires the assistance of specialist equipment and a fire crew, in order to have his leg amputated. But as he waits, it seems that some sort of national emergency is taking place outside. It soon becomes clear that Ben is about to experience the end of the world ... while strapped to a reinforced stretcher and unable to move.

The rest of the book is the story of Ben's survival, which is interspersed with flashbacks to his childhood, his relationship with his late mother and his gradual weight gain. The survival narrative is pretty much the stuff of a horror novel and as such, it's not terribly convincing (I don't for one second believe that a real-life version of Ben would have survived for more than a month) but it is entertaining, despite the elements that stretched my suspension of disbelief just that bit too far, and it's frequently very funny.

It helps that Ben is so utterly likeable. He's kind, gentle and clever and highly self-aware, so it's just impossible not to root for him. I appreciated the fact that at no point does he come across as lazy or greedy - he's simply a sensitive, lonely young man with a seemingly incurable addiction to eating.

I also liked the flashback sections, which are often quite moving. Ben's relationship with his mother is touching but not stifling, even when you get the impression she may inadvertently kill him with kindness. The bullying he endures and the clearly inappropriate ways in which various people try to make him lose weight - he's sent to humiliating diet classes that are quite obviously only going to make things worse - strongly suggest to me that if Ben had just been left alone as a fat teenager, he'd have carried on enjoying playing rugby as a larger man and would probably not have continued to gain weight.

For the most part, we're invited to sympathise with Ben and to understand his addiction, which makes a pleasant change from the way extremely fat characters are usually portrayed. However, the uncomfortable physical realities of his size and consequent limited mobility are talked about in frank detail and his appearance is only ever really addressed in terms of his own and other people's disgust. I found this somewhat dehumanising, at odds with the tone of the rest of the book. Although Ben is certainly an extreme case - to the extent that most of us will never actually encounter anyone his size face to face - the message here is very much that all fat is repulsive and grotesque, and Ben's journey, while presented as being mostly a positive one for him, really just diverts him from one eating disorder to another. I was uncomfortable with that message.

All things considered, however, I enjoyed Before and After overall - it's a quick, gruesome and very funny read, and comes across a bit like a weird cross between 28 Days Later, Shaun of the Dead and My 600-lb Life. Plus, the main character is very likeable and, his mental and physical health issues aside, occupies a world that feels easily recognisable even when the events described are completely implausible.