Good Samaritans by Will Carver 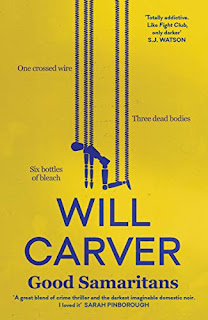 A while ago another of Will Carver's novels, Nothing Important Happened Today, was recommended to me by a retailer and I bought it because I thought it sounded like something I'd enjoy. I then discovered it was apparently the second in the Detective Sergeant Pace series, and I'm quite picky about reading things in the right order, so I downloaded its predecessor.
I actually now don't know if the order of the series matters at all, because this appears to be a standalone novel and DS Pace himself hardly features as a character - he's a mysterious, shadowy presence in the story, appearing on the evening news as he investigates a series of idiosyncratic murders and looking increasingly haggard and drained, but the investigation doesn't drive the plot at all. In fact, it barely matters.
There are four main characters. Seth Beauman is deeply unhappy in his marriage to his emotionally distant wife Maeve. Every night, when Maeve goes to bed, he spends hours dialling strangers' phone numbers in the desperate hope of making some kind of human connection to alleviate his loneliness. One night, he finds himself talking to Hadley Serf, a woman with a history of suicide attempts who thinks she's on the line to the Samaritans. Then there's Ant, who really does work for the Samaritans, so when Hadley calls again expecting to speak to Seth, it's Ant she gets through to.
While all this going on, someone is killing seemingly unconnected women and sterilising their corpses with bleach, leaving them wrapped in plastic and unceremoniously dumped. DS Pace is increasingly tortured by the case - and also by something else in his own psyche, although it's unclear what.
I think anyone expecting Good Samaritans to be a detective story would be disappointed in that regard. It's not an investigative mystery and I think it's fair to say it isn't strictly speaking a mystery at all, although it's certainly structured in a way that intrigues and unseats the reader enough to keep us turning the pages. It's really a very dark thriller with a pervasive seediness about it. Nobody in it is happy. Nobody in it is likeable. Every relationship, romantic or otherwise, is selfish and dysfunctional and morally compromised. It's one of those books that makes you feel you need a good scrub-down with coal-tar soap. If you've ever had one of those unpleasant dreams that isn't quite a nightmare as such, but in which everyone and everything is bleakly horrible and wrong and off-kilter and evokes feelings of disorientation and disgust, this book feels rather like that. That isn't a bad thing - in fact, I think it takes considerable skill on the part of an author to be able to create that mood in writing and it's a compelling read. But it is also an ultimately depressing one.
There's also a lot of physical violence and brutality, most of which is against women, on some level sexual, and gratuitously detailed. I read and watch a lot of crime (including true crime) and a lot of horror, so I'm not especially sensitive to this sort of thing and didn't them shocking, but I did find a lot of those scenes grubby and unnecessary. They struck me as a cynically calculated attempt to be edgy but to me, it just felt exploitative.
Good Samaritans is a well-plotted thriller with some very original touches, including the odd and yet seemingly barely consequential role of DS Pace, a character somehow both haunting and haunted in a peculiarly unsettling way. This book was good enough to make me want to try the next book in the series, but it is at its best when it's slyly, darkly unnerving and at its worst when it's self-consciously nasty, so I hope the follow-up has more of the former and less of the latter.
Email Post
Labels: book review crime good samaritans marriage mental illness murder psychological serial killer thriller will carver