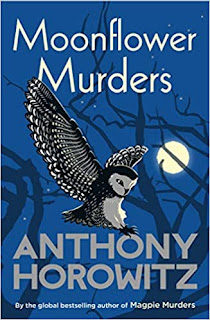 But Susan's new life is interrupted when she receives a visit from Pauline and Lawrence Treherne, who also happen to be hotel owners. Their daughter Cecily has disappeared, leaving behind her husband and her little girl. Immediately before this she told her parents that one of their former hotel staff, convicted of the brutal murder of a guest some years previously, could not be the real killer - and that she thought she knew who was.

The connection with Susan, of course, is once again Alan Conway, the deceased creator of fictional detective Atticus Pund and whose books Susan once edited. Conway was also a guest at the Trehernes' hotel when Frank Parris was murdered, and there are spiteful caricatures of the hotel staff and guests in his book Atticus Pund Takes The Case. It's up to Susan to figure out what it was in Conway's novel that revealed the real killer to Cecily - and of course, who that killer was.

Moonflower Murders follows essentially the same structure as Magpie Murders and is a novel within a novel. Susan begins her investigation, meets the real people involved, and then reads Alan Conway's Atticus Pund Takes The Case, which means we do too. Susan's own narrative then picks up again afterwards with the conclusion of her investigation.

Horowitz is a master of plot and both Moonflower Murders itself and the Atticus Pund novel within it are fiendishly clever mysteries which will appeal to those who like their detective stories packed with clues to discover and puzzles to be solved. The Pund novel is a period detective novel heavily influenced by the style of Agatha Christie, complete with classic character archetypes from Golden Age detective fiction, and the contrast between the cosiness of the Pund mystery and the darker tone of the contemporary whodunnit that frames lends the novel a pleasing extra dimension. The late Alan Conway himself, the almost comically unpleasant author, is a pervasively malevolent presence throughout, and Horowitz's long career in writing TV drama is very much apparent in the dramatic, perfectly paced final chapters.

Moonflower Murders is a detective story for those who not only enjoy detective fiction but are fascinated by its construction and conventions, and yet at the same time it always feels slightly subversive. It's a great follow-up to Magpie Murders - in fact, I think I actually enjoyed it more.