Death In Her Hands by Ottessa Moshfegh 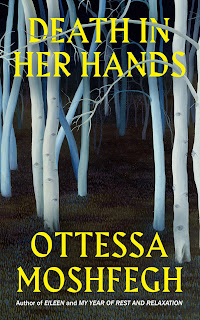 Death In Her Hands opens with a very interesting premise. A 72-year-old widow, Vesta Gul, is walking her dog in the woods near her isolated cabin in the woods when she finds a note. Her name was Magda, it says. Nobody will ever know who killed her. It wasn't me. Here is her dead body.

I think it's reasonable to assume that most people would have imagined the note was a joke or, at least as a purely precautionary measure, told the police. Vesta, though, is not most people: like many of Moshfegh's protagonists, she's a lonely outsider whose thought processes and social skills are unsettlingly off-kilter. Not only does Vesta decide she will solve this murder mystery herself, but she goes about it in a deeply peculiar way. Rather than looking for clues, beyond some cursory searches for information using Ask Jeeves on a library computer, Vesta simply decides on Magda's story for herself.

This is by turns amusing and disturbing. It's fairly clear that there's something odd about Vesta beyond her social isolation. At first, we assume her to be mourning the loss of Walter, her late husband, but the more we learn about Walter the less he seems like someone to be mourned at all. It's unclear whether Walter is responsible for Vesta's mental state or simply saw it and exploited it, but either way, it's unsurprising that Vesta now seeks complete independence.

With that independence, though, comes loneliness, boredom and a rapidly deteriorating ability to interact with either people or situations in any normal way. In creating Magda's back story in her head - she was a teenager from Eastern Europe, Vesta decides, who was working in a fast food restaurant and lodging with an all-American high school boy called Blake and his mother Shirley - Vesta is inventing a world for herself to replace, or at least complement, the dull, limited and lonely one in which she actually lives.

Death In Her Hands is, like Moshfegh's previous novel Eileen, sometimes an uncomfortable read. It's hard to shake the feeling that Vesta is both vulnerable and dangerous at the same time and that means there's a sense of anxiety that builds throughout. There are times when it's also darkly comic, but as Vesta's grip on reality seems to loosen beyond all hope, it becomes considerably more dark and considerably less comic.

Apparently, Moshfegh actually wrote this novel between Eileen, which I have read, and her second published novel My Year Of Rest and Relaxation, which I haven't. All three books are about odd, troubled, disillusioned women, and I would be interested to know why Death In Her Hands wasn't published before now. It's probably uncharitable of me to wonder if it's simply because it wasn't deemed good enough, but I do have that nagging doubt. The premise is a strong one, the protagonist is fascinating and the writing is clever - it's full of off-hand hints, clues and allusions - but it does feel that there's something missing. There's a distinct lack of coherent plot and because Vesta is obsessive, bored and confused, this means that her observations can be repetitive and over-detailed at times. It's a short novel, but it feels longer than it is. There is a lot that I liked about this book, and my opinion of Moshfegh as writer remains undiminished, but I don't think this is her best work.